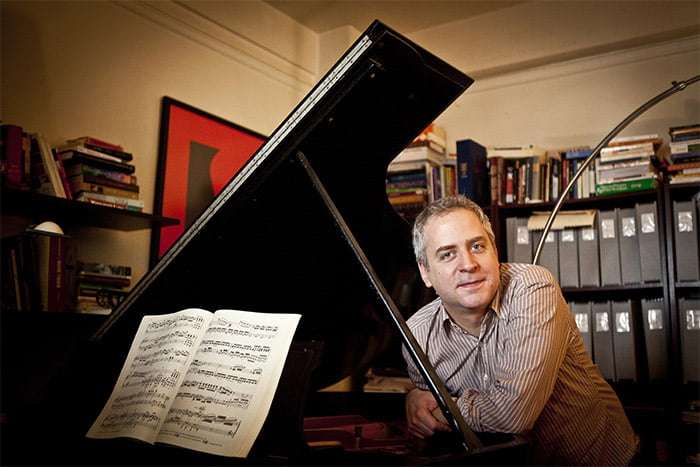 Jeremy Denk has a prodigious technique and musical interests ranging from the staple classics to the deep space of the repertoire. He is also an indefatigable communicator, online and in print, and was in fine loquacious shape with his spoken introductions to his programme with the Britten Sinfonia of jazz-infused works from the early-1920s by Stravinsky, Milhaud and Gershwin, all hooked on to the overall theme of rhythm – which to my mind is bit like a documentary on, say, the sea based on the theme of water.

Anyway, to assert his plan, Denk opened the concert with a Suite (presumably arranged by himself) of short pieces by Byrd (‘Haec dies’, arranged for strings and woodwinds), Dufay (a Chanson, for woodwinds and brass), the Presto from Bach’s B-minor Flute Sonata (BWV1030), with Denk accompanying Thomas Hancox’s superb artistry, Denk on his own in Mozart’s Gigue in G (K574), in which to further prove his rhythmic point he really went for its syncopation potential in distortions of fearless virtuosity, closing with Monteverdi’s madrigal ‘Zefiro Torna’ (from Book VI) arranged for strings, woodwinds and brass, the main thrust of its inclusion being its alternating triple and duple metres, which doesn’t seem that radical an expressive tool.

There was much to enjoy from the various ensembles fielded by the Britten Sinfonia’s responsive, stylish playing, but Denk’s point, that, yes, rhythm and music are inseparable since people started bashing things, was rather laboured. Denk’s playing was more in style but just as bright and exhilarating in Stravinsky’s Concerto for Piano and Wind Instruments. The solemn orchestral opening sounded surprisingly tentative and there were balance problems, while Denk tended to favour the jazz possibilities in Stravinsky’s brittle neoclassicism with a masterly projection of the music’s smart and distancing manner .

Following the interval there was another erudite charm offensive in Denk’s thoughts on Conlon Nancarrow’s ‘Canon A’ (from Three Canons for Ursula, 1989), the rhythmic games, which you’d have thought unperformable by a human, played with irresistible intelligence and élan.

So far, there had been almost too much information, and the concert at last gelled with an excellent performance of Darius Milhaud’s La Création du monde, a short ballet score written for seventeen instruments and based on African myth as filtered through the maverick French/Swiss writer Blaise Cendrars. It is saturated in Harlem jazz and blues, and the Britten Sinfonia really got inside the music’s easy, seductive charm, reinforced by a magical alto-sax solo from Christian Forshaw.

The full saxophone complement, including some expressive grunting from the baritone, were evident for George Gershwin’s Rhapsody in Blue, twenty-four players as scored for Paul Whiteman, which gives the various solos more prominence and the piano part a smoky nightclub glamour. Somehow, Denk and leader Jacqueline Shave between them secured an intimate ensemble, while Denk occasionally risked stasis as he teased out some bluesy delicacy, but from the serenely confident opening clarinet glissando, the performance as a whole was completely involving. Denk had the last word in his encore, Donald Lambert’s outrageous Harlem stride transformation of the ‘Pilgrims’ Chorus’ from Wagner’s Tannhäuser, after which you could forgive Denk for seeming rather pleased with himself.