Classic Moments – Hidden Treasures
A cabaret celebration of some of the lesser-known works of Stephen Sondheim. Music by Stephen Sondheim and Mary Rodgers, lyrics by Sondheim, including songs from the shows Saturday Night, Marry Me a Little, Evening Primrose, Into the Woods, Sunday in the Park with George, A Funny Thing Happened on the Way to the Forum, Anyone Can Whistle, Assassins, A Little Night Music, Follies, The Mad Show, Merrily We Roll Along, Passion, Sweeney Todd, and the film Dick Tracy 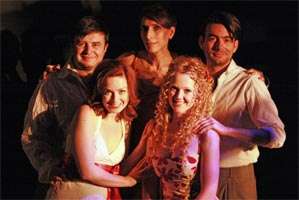 If Stephen Sondheim never writes another word nor composes another note of music he leaves a legacy that is second to none. The veteran of some twenty stage shows, for which in the main he wrote both lyrics and music, and the composer of incidental music and songs for films and plays, Sondheim has made the greatest impression on musical-theatre and the songwriter’s art since the heyday of Irving Berlin, George & Ira Gershwin, Cole Porter and Noël Coward. What’s more, Sondheim has not only mastered the art of entertaining the public as did all those other illustrious names, but he has also made a great contribution to music-theatre as a whole.

Humour in all its manifestations, from farce through witty, sophisticated one-liners to black-comedy, is omnipresent in Sondheim, but there is always a serious side, an ironic twist, an undertow of bleakness to much of Sondheim’s output. Admittedly the Gershwins wrote “Porgy and Bess” and Coward had his “Cavalcade” and his “Bitter Sweet”, but none of them has anything to stand alongside, say, the savagery of “Sweeney Todd”, the historical narrative of “Pacific Overtures”, the depiction of the artist in “Sunday in the Park with George”, the madness of the lone killer in “Assassins” or the nature of obsession in “Passion” – and that’s just for starters. Sondheim’s oft-times director, Hal Prince, that “for a self-styled lazy guy, Steve could fill ten times this many CDs with material he has written… how much more he could have produced, had he been driven.” 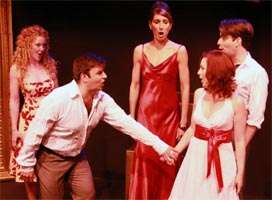 The range of Sondheim’s material is based, like ‘The Madam’s Song’ cut from the film “The Seven-Per-cent Solution”, on the idea that he never does anything twice. In his day he has covered street fighting between rival clans (“West Side Story”), the ambitions of a showbiz mother and her daughter (“Gypsy”), a Roman farce based on Plautus (“A Funny Thing Happened on the Way to the Forum”), the complicated lives of Manhattan’s smart set (“Company”), an evocation of the great days of musical revue (“Follies”), a musical adaptation of an Ingmar Bergman film (“A Little Night Music”), the horrors committed by a notorious serial killer (“Sweeney Todd”), an anthology of favourite pantomime characters (“Into the Woods”)… the list goes on in a musical career that cannot be faulted, equalled or bettered.

For an eightieth-birthday tribute to Sondheim Jermyn Street Theatre is presenting “Classic Moments – Hidden Treasures”, a cabaret celebration of some of the lesser-known works of the composer-lyricist. By my reckoning Sondheim has written well over three-hundred songs for his stage productions alone, more if you count all the cut numbers. Most of his numbers reached their opening nights and became classics of their kind, although others were dropped, never to be heard of again, except perhaps in the many compilations that Sondheim’s work has attracted.

“Marry Me a Little”, a two-hander chamber musical about lonely neighbours living in adjacent New York apartments, was fashioned entirely out of some of Sondheim’s cut numbers, which gave them a new life. Anything by Sondheim is worth collecting. As Hal Prince says: “The demands he makes on himself are such that we’ll never get to see what lies crumpled in his wastebasket, so much of which would have been acceptable to any other composer or lyricist.”

Some other songs, from the earlier musicals for stage and television, are relatively rare and it is these that director Tim McArthur has added to his evening of unfamiliar Sondheim material. Here there is no ‘Maria’ or ‘Tonight’, no ‘Send in the Clowns’, no ‘Comedy Tonight’, no ‘Everything’s Coming Up Roses’, no ‘Ladies Who Lunch’, no ‘Broadway Baby’, no ‘Pretty Women’, no ‘Not a Day Goes By’, but instead a plethora of songs that deserve to be better known. Put your hand anywhere into the Sondheim pie and you will inevitably come up with any number of choice musical plums.

It opens with what would have been Sondheim’s first stage show in 1955, “Saturday Night”. Written way before “West Side Story” and “Gypsy” were even mooted, it was set in 1929 and dealt with young people in New York dreaming of moving up in society from Flatbush to Manhattan. However, just as the show went into production, the producer died and money passed away with him. It wasn’t until 1997 that it received a full-scale production at the Bridewell fringe theatre in London’s Fleet Street. Last year it surfaced again at Jermyn Street where the plangent number ‘What More Do I Need?’ now opens this Sondheim compilation which also includes ‘Isn’t It?’ from the same show. It’s followed by ‘Can That Boy Foxtrot!’, a number cut from “Follies” but incorporated into “Marry Me a Little”, in which Valerie Cutko raves with enormous relish over a guy who has really nothing going for him except one thing – and he still can’t even dance. This is typical Sondheim at his humorous best, although the present show is generally short on comedy-numbers. ‘The Boy From…’ (music by Mary Rodgers, lyrics by Sondheim, written for “The Mad Show”) is both sad and comic with Laura Armstrong as a girl who falls for rather an odd young man on her Spanish holiday and who wonders why he is so unapproachable. Even numbers like these two are infused with a sad, ironic twist. 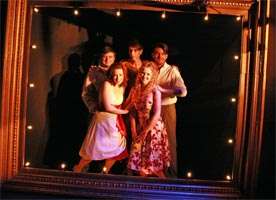 Most of Sondheim’s material cries out to be acted and yet even when taken from their original context the songs still work as short stories. There are two songs from “A Funny Thing…”, ‘Love, I Hear’, a romantic ballad sung by Jon-Paul Hevey, while he is later joined by Tim McArthur for ‘Everybody Ought to Have a Maid’, a delightful point number extolling the virtues of having a congenial menial about the house. This leads into ‘Everybody’s Got the Right’, from “Assassins”, a song in a totally different mood that says that, whoever you are, even a killer, you are allowed to be happy or at least dream of being happy. “Assassins” is also represented by ‘Unworthy of Your Love’, John Hinckley and Lynette ‘Squeaky’ Fromme’s song by the two would be assassins of Presidents Reagan and Ford, and the company sings the ‘Gun Song’ in which McKinley’s assassin Leon Czolgosz considers his weapon of choice.

Hevey has one of the saddest songs in ‘Take Me to the World’, from Sondheim’s 1966 television musical “Evening Primrose” in which a poet falls in love with a young girl who is part of a community of night people living away from the real world in a deserted department store. The song is a plea to return to a life outside. Lucy Johnson also sings ‘I Remember Sky’, another song of sad yearning from the inhabitant of an alien society. “Anyone Can Whistle” flopped in 1964 (nine performances only) but it still has a great score including ‘There Won’t be Trumpets’ (deleted from the original production) which the ladies perform with blazing conviction. ‘Everybody Says Don’t’ is a philosophical plea to face any challenge without worrying about the outcome, because “if you fail, you fail.” Hevey delivers the sentiments with overt credibility. The title number, ‘Anyone Can Whistle’, is a plain-speaking message that says the hard things in life are easy, but the simple tasks are not. Valerie Cutko expresses it with feeling and yet with the emotions kept in check.

From “Into the Woods” comes ‘It Takes Two’, with Laura Armstrong and Tim McArthur in the song for the Baker and his Wife about how a walk in the woods has changed them. Laura also sings Cinderella’s song about the Prince while she stands shoeless ‘On the Steps of the Palace’. Finally Valerie Cutko has the Witch’s exit song, the very spooky ‘Last Midnight’. There are many more pleasures to be had from Tim McArthur’s compilation which he also directs himself. The cast cope well with Sondheim’s changing moods and emotions. Musical Director David Harvey is a sympathetic piano accompanist, playing beautifully modulated arrangements of the Sondheim scores.

All the songs speak for themselves and the show ends on a high, which is often the case with Sondheim. Whatever the subject matter, audiences nevertheless leave in a heightened state of elation. That’s the nature of the music. It may string you out in the process, put you through the emotional wringer but you’ll come out on the other side, unscathed and feeling all the better for it. At Jermyn Street the strains of ‘Happily Ever After’, a song cut from “Company” but one that resurfaced in “Marry Me a Little”, send you away in a positive mood. You can’t keep a good Sondheim song down … a real birthday treat.