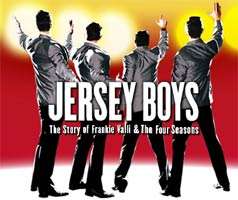 What, not another compilation-show of back-catalogue songs to get over the fact that they can’t write new musicals today? Well, no, not exactly for “Jersey Boys” is a real book musical with a story about a real singer, Frankie Valli, and three other guys from the wrong side of Newark, New Jersey, who made it big in the 1960s with numbers such as ‘I go ape’, ‘Short shorts’, ‘Cry for me’, ‘An angel cried’, ‘Big girls don’t cry’, ‘Walk like a man’, ‘December 1963 (Oh what a night)’, ‘Sherry’, ‘Bye bye baby’, ‘Can’t take my eyes off you’, and so many others.

The show is about the songs and the men who wrote and performed them, their lives, their wives, their lovers, their highs and lows: so it’s a bio-show but the material is so good and the book by Marshall Brickman (who co-wrote many of Woody Allen’s best screenplays) and Rick Elice gives an acerbic, warts-and-all portrait of these very fallible young men who were not particularly nice people. Wheeling and dealing Tommy, who started the ‘boy band’, seems to have been in trouble for most of his life and, with too many criminal connections, was either involved in thieving or gambling and owing money that the group could ill-afford to pay out.

However, they come across as driven men, driven by their music and the urge to escape their lowly beginnings in New Jersey. Frankie Valli, born Frankie Castelluccio, was raised in a Newark public-housing project built on a dump; Bob Gaudio was born in the Bronx but moved to New Jersey while still in high school; Tommy DeVito was born in Belleville, NJ; and Nick Massi was from Newark itself. Between them they created what became known as the Italian-American New Jersey sound, strong pop-love-songs of the 1960s that caught the mood of the youngsters of the time, and are probably still influencing the ‘boy bands’ of today.

Although Valli and Gaudio began The Four Seasons Partnership in 1961, following a failed audition, in fact Frankie had been singing and recording professionally since 1953. Shortly afterwards he met Tommy and his brother Nick and they made some records with Hank Majewski under the name of The Four Lovers. In all they had nearly twenty different names for members of the group either working singly or together. After meeting producer and writer Bob Crewe, things picked up for them and, when they finally got together with songwriter Bob Gaudio, The Four Seasons really took off and for the next forty years they seldom looked back and had a string of hits. Frankie Valli still tours with the latest Four Seasons line-up and, although Bob Gaudio no longer performs, he still writes and produces. The four original members were initiated into the Rock and Roll Hall of Fame in 1990 and the Vocal Group Hall of Fame in 1999.

It’s a pretty amazing story and it has four pretty amazing performers to tell it. It’s a simple format of a slice of their lives followed by the songs that illustrate their successes. It’s an ensemble show, but the four leads – Glenn Carter as DeVito, Philip Bulcock as Massi, Stephen Ashfield as Gaudio and particularly Ryan Molloy as Valli – are all top performers. Molloy superbly recreates Valli’s signature high-voice whose falsetto is something quite otherworldly. Slickly produced and staged by Des McAnuff and Sergio Trujillo, “Jersey Boys” is a breath of fresh air blowing through London’s moribund West End now stiff with long-running musicals that have hogged the best theatres for the past twenty years. It should appeal to young and old alike and will surely outrun the promise of the next compilation-show on the horizon that purports to celebrate the work of “Take That”. God help and forgive us, but praise the Lord for “Jersey Boys”.

1 thought on “Jersey Boys: The Story of Frankie Valli and The Four Seasons”