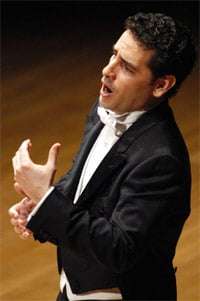 The Royal Albert Hall throbbed with palpable excitement for the star of this Rosenblatt Recital to appear, breaking into delighted applause when he stalked on, following the Württembergisches Kammerorchester, which had opened the evening with the Overture to Bellini’s Il pirata (an excellent, well-balanced performance with a commendably warm horn solo).

Peruvian tenor Juan Diego Flórez may have the disarming charm and filmic good looks of the pop career he nearly pursued, but the young man that Pavarotti decreed to be his heir certainly has the vocal ability to justify his place as a luminary of classical music.

The concert was split into two sections: opening with the operas of Bellini, Rossini and Verdi, the bel canto roles that Flórez has become known for, while the second half focused mainly on Spanish pieces.

In the first half Flórez sang well, his smooth tone and effortless melodic lines flowing freely, but there was a decided lack of content: before the interval, the vocal numbers were alternated with overtures, resulting in Flórez performing just three pieces. Stilted and awkward, too, the singer walking off while the instrumental pieces were played, almost as ‘fillers’. That said, the orchestra, under Alessandro Vitiello, played beautifully throughout, with delicate precision and great attention to detail.

It was after the interval that singer and ensemble came alight, the musicians just as comfortable in the Spanish style as in Italian opera, playing with scarcely contained exuberant energy. Flórez revelled in the melodrama of the music, at one with the roles of strong, supremely confident males, especially in the Vives. In Nicholas Brodzsky’s Oscar-nominated song ‘Be My Love’, the diction was clear and Flórez’s voice and persona subtly shifted to be totally suited to the almost cinematic style. The bubbling energy revealed an intelligently sensitive rendition, with passionate urgency in the lines, “And hand in hand, we’ll find love’s Promised Land.”

The audience was unanimously thrilled with the latest Prince Charming of opera – the first tenor to give a solo recital at Royal Albert Hall since Pavarotti and Carreras, and I was pleasantly surprised with the musical sensitivity shown throughout: this confident, handsome tenor proved himself to be far more than a pretty face.