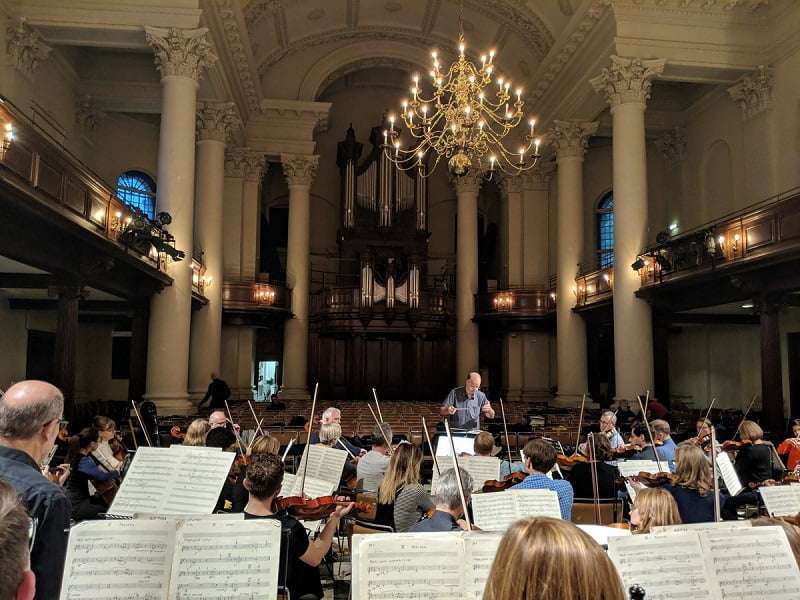 Opening its 18-19 (and sixty-third) season, and also contributing to St John’s Smith Square’s year-long Americana festival, Russell Keable and the Kensington Symphony Orchestra get my vote for including music by New Yorker William Schuman (1910-92), composer and administrator, not least of the Juilliard School and of Lincoln Center, his Third Symphony being the main event.

First up, Joan Tower’s converse response to Aaron Copland’s Fanfare for the Common Man. Tower (a 1938 composer-baby, alongside William Bolcom and John Corigliano) wrote the first of her to-date six Fanfares for the Uncommon Woman in 1986. It opens like the Copland, with attention-calling bass drum and gong strokes, and rather than continue to play the stately card there comes energy, strong rhythmic outlines and trumpet-fuelled edginess; if nothing else it found KSO brass in fine fettle. Step forward the whole ensemble for Leonard Bernstein’s Divertimento (1980, for the Boston Symphony and Seiji Ozawa), eight engaging vignettes eclectic in style encompassing a range of moods, and not forgetting Beethoven 5’s oboe soliloquy, or a West Side Story moment, from urbane to joyous via dark suspense and the blues, including a ‘Waltz’ and a ‘Mazurka’. The KSO had a good go at it, Keable’s one miscalculation being the tempo for the opening ‘Sennets and Tuckets’, cautious on its own terms, bringing a shortfall of exhilaration, and also in relation to the composer’s own conducting of it.

When John Adams led the world premiere of his Doctor Atomic Symphony (adapted from the Oppenheimer opera) at the 2007 BBC Proms it took a debilitating fifty minutes. At least he then cut it down, but even at Keable’s thirty, tedium set in for your correspondent with ten to go. Frankly, it is short on musical distinction, if higher up the scale in terms of theatrical tension and transmitting the characters’ conflicts. The more-engaging material comes in those passages that would suit a sci-fi film, otherwise it is sound and fury and repetition of phrases. The performance though was Herculean and trumpeter Stephen Willcox was sensitive with ‘Batter my heart’ (John Donne), sung by a baritone originally,

As for Schuman 3, it’s a masterpiece, but one that seems to have fallen from view of late, yet its 1941 premiere when conducted by Koussevitzky was a triumph, and from luminaries of yesteryear it also attracted Giulini (LA), Monteux (returning it to Boston) and surely Solti would have jumped at the chance; maybe he did in Chicago. Leonard Bernstein recorded it twice (Ormandy before him) and, today, another Leonard, Slatkin, is a vibrant champion (two links below) and during his BBCSO tenure he made a studio version for Radio 3 broadcast.

Opening with eloquent violas, Schuman 3 (the first two of his ten Symphonies are withdrawn, by the way) is at once rigorous and directly communicative, music with a pioneering spirit, ink-still-wet vitality and profound expression, with perhaps a conscious nod occasionally to Copland and Roy Harris, their respective Thirds, Harris’s already written, making up a “holy trinity” of American Symphonies. To my mind there is also a Baroque quality to Schuman 3 and not just because the four movements are tied as ‘Passacaglia and Fugue’ and then ‘Chorale and Toccata’. Whether inward depth of feeling, brassy clamour, pastoral woodwinds, timpani tattoos (Tommy Pearson), intense contemplation, bass clarinet riff (Graham Elliott) and skirling Finale (only now does Schuman cue the rest of the percussion he asks for, but no side drum rim-shots tonight, a Schuman trademark, for it was strictly sticks on skin) – it all fits, high-end writing that is very demanding on players, so the KSO and Keable’s achievement was considerable, once again going where most other orchestras fear to tread.