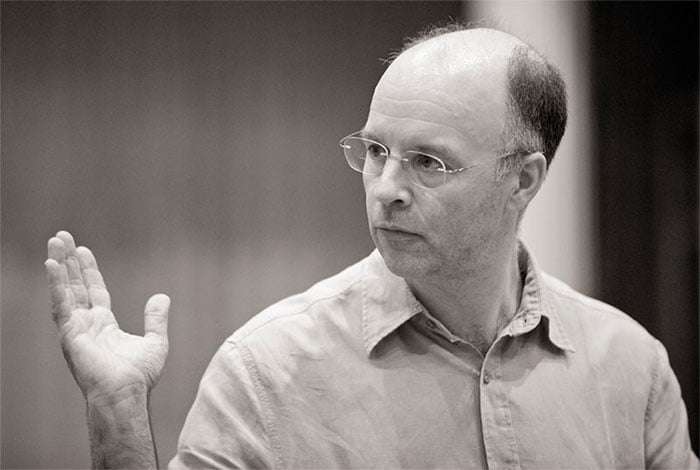 Mike Copperwhite’s silvery and alluring flute solo launched Faune, a sultry performance full of promise that blossomed to eroticism, Russell Keable ensuring curvaceous lines, harps highlighted, sitting on a bed of velvety strings. Overall, this flexibly deciphered Faune was suggestive and transporting. It was followed just as impressively by Henri Dutilleux’s Métaboles, first-performed in 1965 by its commissioners, the Cleveland Orchestra and George Szell. Its five sections play as one and highlight various orchestral sections until finally putting them together. From the off Métaboles is an arresting score, and typically fastidiously crafted. Keable ensured an organic approach, everything belonging and linking, quite suspenseful at times, whether in the depth of writing that is afforded the strings, or the jazzy moments (Dutilleux, 1916-2013, was a fan of big bands), or through the sheer amount of colour and rhythmic exuberance that he conjures. The Kensington Symphony Orchestra made the French Connection, found a Stravinsky subtext, and did Métaboles proud, with savoir faire – dynamic, detailed, sensitive and with bravura.

Wonderful though it is, Berlioz’s highly personal take on Shakespeare’s Romeo and Juliet (“Dramatic” yes, “Symphony”, less so, and involving vocal soloists, not least Friar Laurence to wrap things up, and choirs) contains a mix of longueurs and some absolutely inspired music that is vouchsafed to the orchestra. Russell Keable gave us four such pieces from the five available (not played was the ‘Introduction’ that describes vividly the warring Montagues and Capulets, Romeo from one family, Juliet the other).

We started with ‘Romeo Alone…’. At once the expressions and the colourings could only be Berlioz’s, just part of his inimitable genius. Here was sadness, exquisitely articulated, although there is a party in the distance, thrown by the Capulets, save here it was rather sober if played trenchantly, the booze yet to be unpacked. However, the ‘Love Scene’ was beautifully done, suggestive of a balmy night, with shadows reminding of a relationship that is illicit, and whether eloquent or palpitating, the nuanced playing caught the moods well. With ‘Queen Mab (Scherzo)’ some caution was evident, for this miracle needs to be lighter, quieter and more mercurial than here; if less gossamer and not as quick as ideal, the KSO strings did well with this very tricky number (lots of notes, pizzicato, syncopation), so too the horn foursome responding nimbly to writing that is brilliant if hair-raising. With ‘Romeo at Juliet’s tomb’ (she’s not dead, only sleeping, this state unknown to her beloved) Berlioz is at his most harmonically daring and displaying a range of happenings and emotions – not least the panicking desperation of Romeo; we are left in mid-air, numbed, if now with the full tragedy exposed.