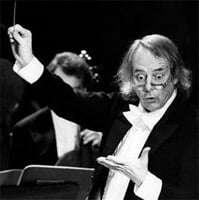 Almost a year since his death and Karlheinz Stockhausen is enjoying the most extensive coverage he has received in London for almost a quarter-century. Coming between the Stockhausen Day at this years Proms and a day devoted to his music next March, “Klang” is a nine-day festival that – along with its talks and ancillary events – juxtaposes widely acknowledged (though not therefore regularly performed) masterpieces from his earlier years with works that were awaiting their UK premiere.

These two concerts offered such a juxtaposition. The late-afternoon one was devoted to Mantra (1970), a seminal work in many respects. Stockhausen’s return to a largely ‘composed’ music after a period in which improvisation and intuition had dominated his thinking, the piece has also (especially in recent years) been credited with re-establishing the primacy of melody in modern music. Although the 13-note sequence, from which all aspects of the work derive, has the feel of an autonomous ‘theme’, its function as a melodic formula is very different from self-sufficient melody in the way that listeners grounded in the standard classics would appreciate. Mantra not therefore being a ‘tuneful’ piece does not, of course, lessen its qualities as a composition or an experience.

Indeed, it is the very consistency – as methodical as it is inevitable – of this work’s evolution that makes hearing it such a pleasure. Working from the principal of its 13 notes giving rise to 13 temporal cycles, Mantra unfolds with an audible logic which is enhanced by the two-piano medium; though the fact that it is described as being for two pianists, who also play woodblocks and antique cymbals as well as transforming their sound via effective use of ring-modulation, helps shift the emphasis from its medium to its presentation in a way which dominated Stockhausen’s thinking over the next decade. Here it is the prevailing calm, such as sets the periodic musical eruptions in strategic relief, that constitutes the work’s raison d’être – allied to the occasional intrusion of more theatrical or, rather, gestural elements that offer glimpses into another, not unhumorous dimension. 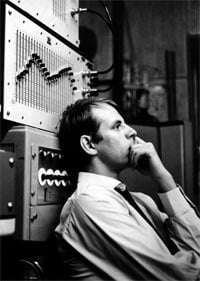 Mantra does not always come off live: a performance at the 1988 Almeida Festival failed on account of its ineffective sound projection, but the present account was a successful one. Sympathetic as individual pianists, Sepp Grotenhuis and Ellen Corver were clearly well matched as a duo – evincing a synchronicity that enabled them to access the music’s depths as well as its more animated asides. As sound projectionist, Jan Panis ensured the high level of clarity was never at the expense of the music’s sonorous texture or beauty of tone. Whether or not its astrological connotations are taken on board, Mantra remains a testament to Stockhausen’s creativity and the musicality of his thinking.

The evening concert featured components from the two projects that dominated the latter half of his composing. Begun in 2003, “KLANG” was envisaged as a cycle encompassing all the hours of the day: at his death, Stockhausen had managed to complete 21 of its 24 sections and several of these are being heard over the course of this series. ‘Glanz’ (2007) is the Tenth Hour and scored for a trio of clarinet, viola and bassoon – though the remit of the Holland Festival commission led him to make a virtue out of necessity and to incorporate ‘appearances’ for oboe, trumpet, trombone and tuba.

Thus the piece unfolds with the core musicians playing around – and, by the end, to – an illuminated sculpture, but their frequent change of position vis-à-vis the latter offsets visual stasis. The music often has a French-sounding introspection, even whimsicality, though the inherently ‘vocal’ nature of the player’s responses to each other similarly ensures that the discourse is never predictable. A discourse, moreover, which the unbidden appearance of an oboe from the rear of the auditorium, a duet of trumpet and trombone from either end of the central gangway, and a tuba from stage-left enlivened without causing confusion. One could imagine a Stockhausen dinner-party proceeding thus.

After the interval, things got livelier still with Orchester-finalisten (1996) – second scene from the stage-work “Mittwoch aus LICHT”. Here the 11 players variously emerge from behind two rows to take centre-stage in a process somewhere between ritual and talent show (the work’s governing element being Air, they are intended to ‘hover’ above the stage), their individual contributions being played out with varying degrees of theatricality. As aural backdrop to this, Stockhausen has assembled one of his most intricate octophonic scores – the eight loudspeakers sending forth a constant stream of ‘sound scenes’ drawn from elsewhere in the cycle besides evoking a dizzying succession of images from the modern world. Towards the close, this grows in volume and intensity; the double bassist having been stopped in his tracks by the arrival of a Mummy-figure who strikes a gong, the musicians then reassemble for a free-form ensemble that only dissipates as they gradually vacate the stage.

Both works benefited from the dedication of the recently-christened Asko-Schönberg Ensemble, as focussed in individual efforts as uninhibited when coming together. The sound projection, as supervised by the composer’s long-time colleague Kathinka Pasveer, made the most of the Queen Elizabeth Hall acoustic, while Maarten Warmendam’s light projection ensured a sense of occasion without being overbearing. Indeed, the most obvious factor in this concert was that sense of humour – witty, sometimes anarchic, but always well-intentioned – such as Stockhausen is often accused of not having. In reconciling this with his command of instrumental potential, he has few, if any, equals.