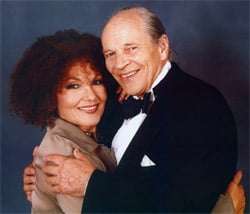 “Accentuate the Positive” seemed like a suitably upbeat way for Cleo Laine and John Dankworth to mark their contribution to this year’s London Jazz Festival and, as she and the band along with the London Vocal Project, breezed through the eponymous opening number, all seemed right in the world.

Yet for the first couple of British jazz, this has not been a year to remember – Laine having broken a leg when only just recovered from a knee-replacement operation, and Dankworth having been taken seriously ill soon afterward. Indeed, it was Laine who ‘held the fort’ during a first half that featured a suave rendering of ‘Slow Boat to China’ and an uninhibited run-through of ‘Fascinatin’ Rhythm’. Here as elsewhere, not least a breathtaking account of ‘It Amazes Me’, the poise and precision of Laine’s vocal range made age and infirmity of no consequence: few singers half her age can begin to match her subtlety and shading of delivery. Jacqui Dankworth was on hand for a soulful rendering of ‘The Folks Who Live on the Hill’ and gave ‘One Friend’ the full-on ballad treatment, while Christian Garrett led his string quartet in a sparkling Bach medley confirming his formidable prowess as a jazz fiddler.

There was more of the same – that is, constantly varied according to the mood of the song at hand – after the interval. Jacqui Dankworth returned for a suitably airborne take on ‘Skylark’, and then joined her mother in the teasing repartee of ‘I Thought About You’. In a second half dominated by the all- round talents of Johnny Mercer, Laine breathed new expressive life into ‘When the World Was Young’ (here sounding way more ardent than did Scott Walker’s studied world-weariness some four decades ago), while not failing to kick over the traces with ‘It Don’t Mean a Thing’. The members of London Vocal Project flexed their a-cappella muscles ably in ‘The Midnight Sigh’, while veteran trombonist Mark Nightingale was a model of discreet authority as leader and Alec Dankworth contributed some scintillating bass work. Between them, they held the band together as if they might have set it in motion from the beginning.

The highlights had to be those from the end of each half. Defying illness as well as the medics, John Dankworth emerged – wheelchair-bound but unbowed – to apologise for not fronting the show from the start. Nor had he been able to practice beforehand, but this was belied by the limpid delicacy he conjured from his alto sax in his inimitable take on Duke Ellington’s ‘Tonight I Shall Sleep’. His clarinet, too, shone for the final number: that formerly known as ‘Cavatina’ which, through Laine’s apposite lyrics, is now established ‘He Was Beautiful’, sung here a pathos that admitted of no false emotion.

On both occasions, the couple were greeted with a standing ovation from the near-capacity audience. The context may have been one of nostalgia laced with regret, but the excellence of what was heard left no doubt as to Dame Cleo’s and Sir John’s continuing mastery of their craft.