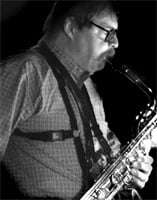 “I’ve been trying”, John Surman announced with a smile before playing a note, “to get into this room, with these musicians, for about six years”. Perhaps so, but he recorded the album “Coruscating” with Chris Laurence and the Trans4mation Quartet back in 1999, the group’s “The Spaces in Between” was released earlier this year to great critical acclaim, and Surman and Laurence go back nearly 30 years.

Although Surman is often thought of as a jazz musician, the group’s music is better described as “European improvised music”. Indeed, any fears that the legato block chords of the opening piece meant that the quartet would be sidelined to the role of ‘comping’ jazz piano were quickly dispelled. By the second piece, the string arrangements had grown increasingly contrapuntal, the bowing more agitated. Laurence slotted in effortlessly, being more a second soloist and counter-melodist to Surman than a conventional rhythm-section player. But then for many years he has led a double life as a jazz and classical performer; until 1995, he was principal double bass with the Academy of St Martin in the Fields.

Surman’s minimal vibrato meant that his baritone-saxophone was often remarkably close in timbre to the strings (particularly the bass), and his melodies often have a charming English pastoral quality. A programmatic interpretation is hard to resist for compositions that have titles as poetic as “Wayfarers All”, “Winter Wish” and “Moonlighter”. There was humour as well. Surman – a fine raconteur throughout the evening – said that someone had told him that “Leaving the Harrow” (a pub) sounded as if he’d had a couple of pints when he wrote it and, sure enough, the piece had skewed rhythms, a frenetic bass solo and finished with a sleepy (drunken?) slide. And when Surman played a jaunty theme on soprano sax and wandered around the group, one couldn’t help but think of him as a pied piper or wandering minstrel.

Nevertheless, other influences were discernible. One tune had a distinctly North African or Turkish feel, particularly in its use of the harmonic minor scale, off-centre rhythms and string phrases ending with upward glissandos. There were also free-improvisation interludes, a soprano-sax solo – full of circular breathing, flurrying ostinatos and wide intervals – reminiscent of Evan Parker. And speaking of solos, Rita Manning’s performance of “The Spaces in Between” was stunning, brimming with shimmering bowing, double stops, dramatic leaps and – perhaps in deliberate self-reference to the piece’s title – abrupt, tension-building spaces in between phrases. It was hard to tell where composition ended and improvisation started.