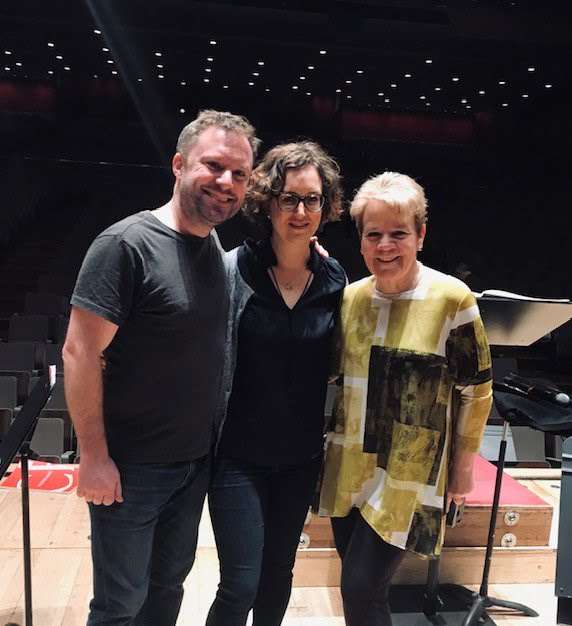 This remarkable concert – consisting entirely of premieres of various sorts – launched SoundState, the Southbank Centre’s enterprising five-day new-music festival. Multiple signifiers being everything these days, it also inaugurated the London Philharmonic’s year-long festival of British music, Isle of Noises – this apparently not only because it featured a new work by Helen Grime but also because the programme exemplified Alex Ross’s assertion that the UK is one of the best places in the World to create the latest music. It was also a very exciting concert, presided over with genial authority by Marin Alsop.

Almost by definition, a programme of nothing but premieres must surely shed at least some light on the current state of contemporary classical music, for want of a better label, as we head toward the third decade of the twenty-first century. It would come as little surprise to anyone who has followed the story so far that the message is ‘plurality reigns supreme’. The unabashed and non-ironic use of tonal/modal elements freely emerging out of (and disappearing back into) non-tonal material might be one discernibly common element on the evidence of at least some of the works here. Strikingly, the closest we came to old-school modernism (apparently not a contradiction in terms) was supplied by the youngest composer represented, Arne Gieshoff (born 1988). He also provided another UK element in the concert, in that he has been based in London for much of his formative time.

Burr is an LPO commission that flowed from Gieshoff’s previous involvement in the orchestra’s Young Composers programme. Inspired by a three-dimensional puzzle, Burr is a Carter-esque blend of febrile hyperactivity and pockets of stasis, sometimes overlaid. It functioned well as a five-minute opener, whilst at the same time fairly begging for further development and expansion. Gieshoff is a new name to me but this performance without doubt will put him more visibly on the map.

By contrast Swede Anders Hillborg (born 1954) is now one of the most esteemed and often performed composers of our time. It is not difficult to hear why – glittering textures recalling early Ligeti freely mingle with surreal and macabre humour to transfixing effect. Sound Atlas, a commission by a consortium of orchestras including the LPO (co-commissions being a Hillborg staple these days), is a five-movement construction featuring an extensive role for glass harmonica (articulately fingered here by Philipp Marguerre). The titles of the first two movements – ‘Crystalline’ and ‘River of Glass’ – accurately convey the prevailing soundworld of the piece, in which sonic flurries of snow blow over an underlying glacial slowness. The harmonic world of Sound Atlas is a free admixture of tonal and non-tonal writing, such that the emergence in the final movement ‘Hymn’ of a radiantly triadic passage for strings felt entirely logical and apt. One hesitates to invoke the influence of Sibelius when discussing the work of Nordic composers, but I felt the unmistakeable presence of Symphonies Six & Seven at this point.

A crystalline soundworld is also discernible in parts of Solastalgia by the Estonian composer Erkki-Sven Tüür (born 1959). A lament for the effects of environmental change, as witnessed by the composer on the island of Hiiumaa in the Baltic Sea where he lives, the work was commissioned by another consortium of orchestras including the Royal Concertgebouw who premiered it in Amsterdam in December 2017. This single-movement piece captured attention from the opening – an expansion of the piccolo into a world of multiple flutes – and never let go. The piccolo consistently initiates processes in the orchestra, rather than the conventional concerto relationships of accord or antagonism. A gradual thickening of textures peaks with a Zappa-like passage of big-band brass and drum kit, after which ethereally tumbling percussion leads us back to the multiple flutes of the beginning, and finally into inarticulacy: an outstanding work. Stewart McIlwham (principal piccolo, LPO) was the calmly authoritative soloist. Alsop had been giving short introductions (a model of their kind – witty and to the point) to each work together with their respective composers (only Andriessen was not present) but Tüür had evidently not received the memo and had to dash down to the stage from the audience.

The most senior figure represented then was doyen of Dutch composers, Louis Andriessen (born 1939), whose Agamemnon was premiered by the New York Philharmonic last October. Proceeding as a series of discreet tableaux (although a single-movement entity), the piece draws musical inspiration from characters and incidents in the life of the Mycenaean king (“part good guy and part bad guy”, per Andriessen’s programme note), albeit not in literal or pictorial fashion. Ancient Greek modes hover in the background of the melodic writing, if not as explicitly as in the much earlier De Staat. Right from the opening trumpet fanfare, there is opulence to the writing that would not be too out of place in a Hollywood ‘toga and sandals’ movie of the 1940s. At the other end of the sonic spectrum, there is a delicious solo passage for soprano saxophone, marvellously taken by Martin Robertson. The stylistic mix is certainly eclectic – not just touches of Messiaen and Takemitsu but also Bernstein (my companion also identified Gershwin and I would not demur). I greatly enjoyed Agamemnon, even whilst being bemused as to how strangely conventional Andriessen’s music can sound when it is articulated by a regular orchestra rather than the percussive wind ensembles he more usually favours. One thing that did not work for me was the spoken passage that ends the work, here delivered by the LPO’s cor anglais player Sue Böhling, from within the orchestra. It seemed perfunctory in execution and did not feel like the natural final destination of the piece.

Finally to Helen Grime (born 1981), who continued the upward trajectory of her position on the British music scene with her superb new Percussion Concerto, yet another percussion vehicle summoned into being by the staggering virtuosity of stick and mallet supremo Colin Currie. The composer – who normally builds her musical structures through the proliferation of melodic lines – had worried that purely rhythmic writing would take her well outside of her comfort zone. And in the first movement (of three, played continuously) she does confine the soloist to pitched instruments, largely the vibraphone, exchanging dizzying chromatic lines in strophic dialogue with the orchestra. Currie moved to the other side of the stage for the central movement, featuring chiefly unpitched instruments. This built to a magnificent sustained climax with the soloist rotating patterns around his kit, which I wanted to never end, but it did so with a beautiful harmonic and melodic distillation. The final movement returns to the gestural elements of the first but blossoming out into a new clarity, before a final evanescence. The whole work is a model of clarity, timbral exquisiteness and rhythmic tautness. Currie rose to every challenge and gave the impression he could have taken worse.

No praise can be too high for the contribution of Marin Alsop to this concert. She was inspirationally committed to each of the works and was in total command, especially in the all-important (in this repertoire) rhythmic articulation of the music. The LPO responded in kind and delivered outstanding performances without any sense of flagging or resistance. An exemplary exercise all round. I will happily leave any contemplation of whether a concert of all premieres is necessarily the best birth passage for any individual new piece until such time as it is a norm.