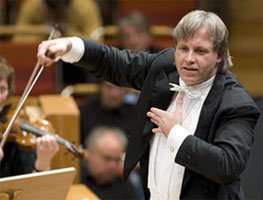 For anyone who likes their music new and challenging, Markus Stenz will be familiar at the Southbank Centre from his time with the London Sinfonietta. These days he holds the grand title of General Music Director of the City of Cologne. He is also Principal Conductor of the city’s Gürzenich Orchestra, to which he will soon add a commensurate post with the Netherlands Radio Philharmonic Orchestra. Manchester audiences will be alert to him, too – he is the Hallé’s Principal Guest Conductor – and, following a Glyndebourne liaison with the London Philharmonic, this was Stenz’s first concert date with this Orchestra. Quite clearly Stenz and the LPO have established a productive relationship and a close rapport.

Musical blood-brothers Mozart and Richard Strauss had both reached the age of 32 when they composed the respective works heard here. Mozart would soon be breathing his last, while Strauss had several more decades of creativity ahead of him. Stenz conducted the ‘Jupiter’ Symphony without a baton, his balletic body language securing a performance of exuberance and poise. A little more vibrato from the strings (violins sitting antiphonally) would have been welcome (‘authentic’ isn’t the only way), but the nimbleness and expressiveness of the rendition was fresh and buoyant, the slow movement flowing if shot through with deep emotion, and the Minuet has rarely been so light on its feet. Having been mostly generous with repeats (save in the Andante), it was a shame that Stenz overlooked the second one in the finale – its observance seems obligatory to give the symphony its ultimate majesty – but this was a contrapuntally clean and magnetically performed account.

The Strauss was also impressive, a reading teeming with incident and involvement, Stenz and the LPO letting this Nietzschian adventure off the leash. The opening ‘Sunrise’ – however now skewered by Kubrick’s use of it in 2001: A Space Odyssey – found brass, timpani and organ in noble tandem. From there the music’s intertwining, swirling and pondering was all of a piece – loutish coughing aside, ‘Of Science’ was a hypnotic slow-burn of a fugue, and Pieter Schoeman was a stylish, schmaltz-free violinist in ‘The Dance Song’, a Viennese waltz. The only miscalculation was when the midnight bell sounds; here, the tubular variety was simply inaudible. Otherwise, this vibrant performance hit the spot, the work’s polar-frequency highs and lows equally attended to. Josephine Knight contributed much on her cello.

Mark-Anthony Turnage’s viola concerto On Opened Ground (2002) made a considerable impression here, Stenz and the LPO fully finished collaborators. Written for Yuri Bashmet, it is Lawrence Power who has put it on the map ever since. He played magnificently, producing a full and easefully projected timbre that was consistently true to the viola’s particular qualities (without ever suggesting a violin or a cello). In relationship to Seamus Heaney’s collection of poems, Opened Ground, or a title punning the foundation of a chaconne, On Opened Ground emerged here as a richly argued and deeply communicative piece, immediately compelling from the viola’s waspish opening gesture through to the distant memory with which the work fades to nothing. Turnage’s compositional hallmarks are in evidence, the urban and neon aspects, the Miles Davis-like jazz, with solitude and angst rubbing shoulders in sinewy argument. Whether lyrical, disruptive, regretful or fragmentary, the music holds concentration, the orchestration colourful, edgy and variegated, hand-bells adding a runic touch.

Elements of the solo writing can perhaps be traced back to William Walton’s Concerto (of which Power is a champion), and – the composer might be surprised to learn this as much as I am surprised to be writing it – that I found parallels with American composer’s William Schuman’s Concerto on Old English Rounds, his viola concerto, and a masterpiece, a status that might well be afforded the Turnage. He divides On Opened Ground into two movements – ‘Cadenza and Scherzino’ and ‘Interrupted Song and Chaconne’. The break broke the spell somewhat; maybe there’s really a continuous work here.