Hot on the heels of the National Youth Orchestra’s invigorating musical exploration of 20th-century revolutionary acts at the weekend, here the capital’s own spectacular array of young musicians – the London Schools Symphony Orchestra – upped the ante in this Faustian bargain of a concert entitled Music from the Dark Side. 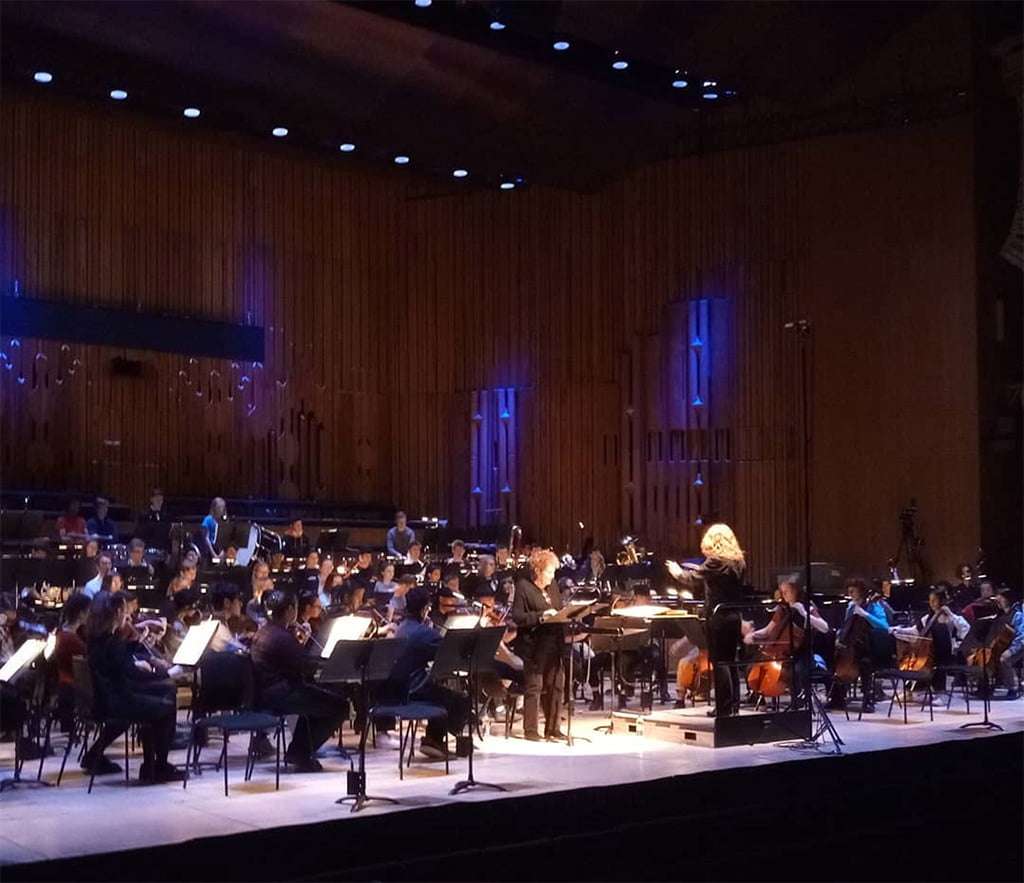 Leaving aside the question of whether schoolagers should be dabbling in the dark arts, this was a beautifully (or should that be devilishly?) crafted programme that dovetailed diabolical descriptions from John Milton’s Paradise Lost, Christopher Marlowe’s Dr Faustus and Goethe’s Faust with music by Penderecki, Mendelssohn, Liszt, Berlioz and Schnittke. The latter brought an even earlier version of the Faust legend to the mix, the series of tales collected by German publisher Spies in the mid-16th century, a translation of which inspired Marlowe. The readings were vividly enacted by the majestic Dame Janet Suzman, suitably gowned in satanically sartorial red.

Occasionally Suzman spoke over the music, but this had been scrupulously prepared and it was timed to perfection. Appositely her opening words, from Milton’s ‘How the Angels arrived in Hell’ section, were melded with Penderecki’s melodrama from his 1978 opera Paradise Lost, premiered in Chicago over 40 years ago. With Sian Edwards in charge, her young players were secure in creating the crepuscular atmosphere, with its opening darkest hues, gradually infecting the whole orchestra. The 50-strong London Schools Symphony Orchestra Chorus (unlike the orchestra, not all school age) really needed to be larger to project their parts over the orchestra.

The orchestra was equally at home in Mendelssohn’s Prelude to his cantata Die erste Walpurgisnacht and then the devilish dance that infuses Liszt’s Mephisto Waltz No.1, let alone Berlioz’s two excerpts from The Damnation of Faust, the choir more animated here in their diabolical imitations in the Pandemonium that follows the Ride to the Abyss, where Mephistopheles drags Faust to his doom. Guildhall soloists, bright-toned tenor Brenton Spiteri’s Faust was suitably matched with the darker-hued baritone Tom Mole as Mephistopheles.

Bringing the story to its conclusion, Schnittke’s Seid nüchtern und wachet (Be sober and attentive), commonly known as his Faust Cantata, was completed in 1983 before becoming the final act of his opera Historia von D. Johann Fausten, premiered in Hamburg in 1995. It describes the events of Faust’s final day, after 24-years in cahoots with Mephistopheles, including his address to his students and final demise. Schnittke’s soundworld is immediately recognisable, and was here prefaced – accompanying Suzman’s final excerpt, Faust’s last great soliloquy by Marlowe – with the sonorous ringing rattle of the eleventh hour, tinged with one of Schnittke’s favourite sounds, the harpsichord.

The cantata opts for a non-traditional range of voices: Faust is the bass (Tom Mole again) and Mephistopheles in not one, but two voices – countertenor (Collin Shay) and mezzo (Fiona Kimm) while our returning tenor acted – Passion-like – as an evangelist, telling the story. Kimm, assuming her form later than Shay, started in the auditorium and as the music becomes a tango-like dance, she all-but sashayed onto the stage, her voice smoky and atmospheric. Again the chorus was the weak link, but Schnittke’s architecture shone through – an arch from chorale to open before ending with the choir singing the moral of the title.

One of the most intelligently programmed concerts I’ve been to, this was a triumphant occasion, the underwhelming choral forces aside. It was filmed and recorded, though there was no indication in the programme for what. Perhaps equally as dangerous for schoolagers, the next concert – on 27 April – is devoted to Star Crossed Lovers, encompassing more literary inspirations in Tchaikovsky, Bellini, Gounod and Bernstein’s take on Shakespeare’s Romeo and Juliet.