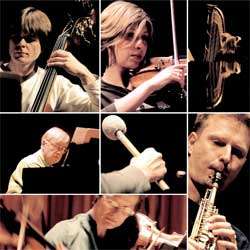 It hardly seems 20 (actually nearly 21) years since the late Michael Vyner, the London Sinfonietta’s then Artistic Director, looked forward to the ensemble’s next two decades. His latter-day successor Andrew Burke was placed in the (un)enviable position of anticipating the Sinfonietta’s next 40 years of achievement in the realm of modern and contemporary music. An achievement such as was rather obliquely commemorated in this programme of recent and specially commissioned pieces.

The evening duly began with a revival of Cortege (2007), Harrison Birtwistle’s re-working of his 1989 tribute to Michael Vyner (and likewise dedicated to his memory), Ritual Fragment. As in that earlier piece, the Sinfonietta principals cross between either side of the platform – briefly assuming centre-stage for their overlapping soliloquy, while immutable rolls from tenor drum mark the passing of time and maintain a temporal focus in a theatrical manner typical of the composer. Textures were fuller and more intricate than in the source work, imparting an almost tangible sense of atmosphere to music that amply fulfils the role either of processional or recessional according to its context.

Birtwistle, of course, is an acknowledged master of his craft and it was only right that composers at or near the stage that he himself had reached at the time of the London Sinfonietta’s inception were given a platform at so high-profile an event. That said, the three longer commissions were all disappointing. Thus Christian Mason’s In Time Entwined, In Space Enlaced promised a thoughtful interweaving of its elements on- and off-stage, but the subtle heterophonic procedures deployed were qualified by the musical material’s intrinsic lack of interest. Larry Goves’s “Springtime”, the setting of a wistful and laconic poem by Matthew Walton, evinced little of the intended feeling for its text – Juliet Fraser’s luminous soprano sounding stranded rather than intensified by accumulating layers of digital delay. Claudia Molitor’s untitled 40 [desk-life] could have amounted to a refreshing take on the process and ‘habits’ of composing, but its interplay of instrumental, electronic and visual imagery failed to evolve into a provocative synthesis and rather too quickly outstayed its welcome.

Perhaps because they were all more limited in length and ambition, the five miniatures left a stronger impression. John Woolrich’s Fragment is an atmospheric sequence of melodic motifs for soprano saxophone, while Birtwistle’s The Message proffered a brief but arresting fanfare for E flat clarinet, trumpet and side drum. Anna Meredith’s Lylat brought trombone into lively accord with a tape component (apparently of processed thumb pianos, it sounded uncannily like the ‘teleprinter’ that was once a regular feature of the BBC sports programme “Grandstand”!), then David Lang’s land/lease provided a plaintive testament to Anglo-American co-operation for piccolo and claves, while Django Bates’s The Corncrake Plays the Bagpipes put two violins and cello through their collective paces with the latest in a century-long tradition of oblique ‘happy birthdays’.

If this latter sequence gave various of the Sinfonietta principals a further chance to shine, then John Adams’s Chamber Symphony (1993) provided an ideal forum for the whole ensemble to demonstrate its virtuosity. And, from the blithely surrealist atmosphere of ‘Mongrel Airs’, via the deadpan take on jazz procedures of ‘Aria with Walking Bass’, to the maniacally accumulating rhythmic momentum of ‘Roadrunner’, this is a showpiece-with-substance bar none in new music and surely the most durable instrumental work by a composer whose dominance of Western art music is often regrettable. Diego Masson directed a riveting performance – the finale being even more so when repeated as an encore – and with an often-imaginative visual accompaniment devised by students from Kingston University.

A pity that a major part of this concert promised rather than delivered, but there was no lack of variety in the music and the Sinfonietta’s playing left little doubt as to its excellence. Clearly the ensemble has a central role to play in the dissemination of new music for at least another 40 years.