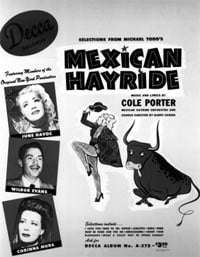 Avrom Hirsch Goldbogen, one of nine children, was born in 1909 in Minneapolis to Polish-Jewish immigrants. The family moved to Chicago on the day World War One ended. Young Avrom had many jobs before settling in the construction business. He opened the College of Bricklaying of America but the plan failed when the Bricklayers’ Union disapproved. He then started his own construction company with his brother Frank, made a lot of money and then lost it in the Great Depression. Always interested in the fascinating world of show-business Avrom then worked in Hollywood, and, in 1933, produced an attraction for the Chicago Fair called Flame Dance, a gadget that could burn off the clothes of a dancer using lighted gas jets. This got him an offer from the Casino de Paris in New York.

This taste of Broadway made Avrom want to stay in show-business. He had already directed a school production of The Mikado and in 1939 decided to stage it as The Hot Mikado with an all-black cast including Bill ‘Bojangles’ Robinson. Its success led to Avrom Hirsch Goldbogen – who by then was known as Mike Todd – producing some thirty Broadway shows, although they weren’t always as sophisticated as his Gilbert & Sullivan. As he admitted: “I believe in giving the customers a meat and potatoes show – dames and comedy, high dames and low comedy.”

In 1942 he put on Star and Garter, the star being the stripper Gypsy Rose Lee with a chorus of beautiful girls. He had an eventful career that included many other public attractions. Later on Todd became more famous as the third husband of Elizabeth Taylor but among his other innovations were productions of Johann Strauss operettas on Long Island, complete with gondolas; he introduced the wide-screen Cinerama process, followed by Todd-AO, another big-screen process that eliminated the disadvantages of Cinerama; and he produced the first film version – and the most memorable – of Jules Verne’s Around the World in Eighty Days. 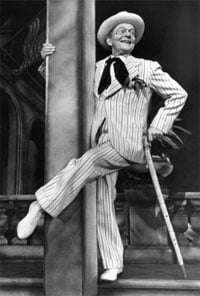 Also in 1942 Cole Porter and Herbert and Dorothy Fields collaborated on a show for Ethel Merman called Jenny Get Your Gun. When the original producer turned it down on the grounds that neither the songs nor the book were good enough, Todd had no hesitation in accepting Porter’s suggestion that he produce it. It turned out to be a big hit, running for over four-hundred performances. Because Todd had had such faith in Something for the Boys, as it was by then called, Porter felt obliged to write the producer another show. The same team got together in 1944 and came up with Mexican Hayride, a modest musical farce that was given a spectacular staging by Todd that ensured it another long run. It starred a popular comedian of the time, Bobby Clark, and June Havoc, sister of Gypsy Rose Lee, and the character of Baby June in the Jule Styne-Stephen Sondheim musical Gypsy. It garnered a staggering advance at the box office of $300,000 at a time when, say, Oklahoma! cost a mere $82,000 to stage.

Despite its original success, the show never came to London and appears not to have been revived in the US. The property was, however, bought by Universal Pictures as a vehicle for the comedy team of Bud Abbott and Lou Costello but neither the Fieldses’ book nor the Porter songs were used, although one song ‘I love you’ was filmed but cut from the final print. Abbott hated the script and Costello wanted different casting including Lucille Ball and Carmen Miranda.

Looked at now, however, it is not one of Cole Porter’s best scores; virtually none of the dozen or so songs has become a standard, and another sixteen were cut from the original score. The remainder of the numbers are no more than serviceable and, like many show tunes of the day, have little or no connection with the plot. Even the book seems a tad corny and it can only have been the original performances coupled with Todd’s elaborate production that made the show a success. The opening chorus, ‘The good will movement’, ‘Girls’ and ‘What a crazy way to spend Sunday’ must all have been great showstoppers. However, with little or no staging to speak of, the Lost Musicals presentation has to rely on the performances, although Ewan Jones has instilled some panache in the staging of chorus numbers.

The plot is somewhat eccentric. Exotically set in Mexico where Montana, a female bullfighter, is about to throw a bull’s ear to David Winthrop, a US ambassador. However, when she spots her conman brother-in-law Joe in the crowd in her anger she chucks him the ear which he catches, entitling him to be an honoured guest. Joe is working with another crook, one Lombo Compas, trying to set up a national lottery. When the Mexican authorities go after them they reappear in various guises as tortilla vendors, mariachi musicians and an Indian squaw – no, despite appearances, I am not making this up. It is all very silly and typical of the period in which it was written. Most of it is knockabout comedy tempered by the on-off love-affair between Montana and David.

Bobby Clark, the original Joe Bascom, was a comedian in the Groucho Marx style and this is how Michael Roberts plays the part. He certainly works hard and really makes the most of the sometimes questionable script. He is a naturally funny performer and proves to be the highlight of the show. Lost Musicals’ veteran Louise Gold as Montana is also capable of putting a gloss on not-so-great material and she does have a couple of half decent songs in ‘There must be someone for me’ and ‘Abracadabra’.

Jonathan Hansler as Lombo, Joe’s villainous sidekick, has his moments while Stewart Permutt contributes three good smallish parts as the over-amorous Augustus Adamson, the Chief of Police, and as Lydia Toddle, an aging female tourist who never stops fanning herself. Myra Sands plays her companion Tillie Leeds with her usual comic bluster. Incidental pleasures come in the form of Lolita as played by Wendy Ferguson, a classically trained singer with a heavenly powerful voice of great range which she uses to full effect in the numbers ‘Sing to me guitar’ and ‘Carlotta’. As David Winthrop, Graham Bickley has relatively little to do but he does get the one number that found a life after the show, namely the aforementioned ‘I love you’. This song was written for a $25 wager from actor Monty Woolley who bet that his friend Cole Porter couldn’t write a hit song using a hackneyed title like ‘I love you’. He could and he did and Perry Como, Jo Stafford, Frank Sinatra and John Coltrane all recorded it, while Bing Crosby had a number one with it.