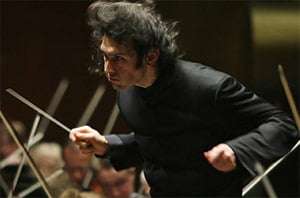 For this concert, the London Philharmonic Orchestra’s Principal Conductor had certainly picked a demanding programme, which was, however, inexplicably and quite unnecessarily prefaced – with the Orchestra fully assembled on the platform – with a fifteen-minute talk by Vladimir Jurowski to the audience, somewhat patronisingly attempting to justify the juxtaposition of the four works and attempting to find connections between them. In this he was at times unsuccessful and at others downright misleading. In fact, he said nothing that could not have been accommodated in the £3.00 programme, so that, by the time Debussy’s Jeux began, we might have found ourselves wondering just where we were in the broader scheme of things.

Jurowski’s microphone having been dismantled and taken away, we could at last concentrate upon Debussy’s music, although Jeux is not one of this composer’s better works. Nonetheless, the performance was a fine one, distinguished by adept internal balance, playing of a very high class, and an engrossing atmospheric sense that was wholly admirable.

The orchestral strings were reduced for Stravinsky’s Violin Concerto – also not one of his most inspired scores – although Kolja Blacher’s performance was, in the main, very good; one missed, however, the element of sardonic humour that runs through much of the work as the composer strains too hard to be too clever by half. In this, Blacher lacked a genuine sense of projection; although his playing was technically immaculate it lacking that yielding quality which can make the piece much more human. Jurowski accompanied very well yet one doubted that the final bars were as impeccable as they should have been.

Stravinsky’s Scherzo fantastique was first performed in February 1909 under Alexander Siloti (Rachmaninov’s cousin); in the audience, hearing Stravinsky’s music for the first time, was Diaghilev. He was at once taken by the balletic implications in the music, which was brilliantly conveyed in Jurowski’s performance. This is a very rarely played work; no doubt the requirement for three harps (as in The Firebird) tells against frequent performance.

Rachmaninov’s Symphonic Dances, the greatest work here, was exceptionally well performed, with much attention to detail and excellent choice of integrated tempos, allied to very fine orchestral playing (corporately and individually) indeed, to bring this fascinating concert to a brilliant conclusion.