In spite of his eminence among German composers of the older generation, Helmut Lachenmann (born 1935) has enjoyed only limited exposure in the UK, though a week-long residency at the Royal College of Music some years ago certainly accorded him cult status among those students and younger composers present. This LSO concert, though, was the first time that a London orchestra – other than the BBC Symphony Orchestra – has programmed his music, and the choice of Double (Grido II) proved to be a worthwhile one. 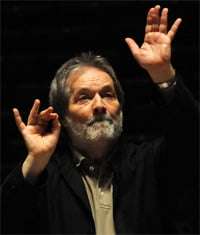 Created in 2004, Double is the whole-scale transformation for 48 strings of the earlier Third String Quartet, entitled ‘Grido’ (an acronym for the then-members of the Arditti Quartet who premiered it). Lasting some 24 minutes, it deploys the full range of extended techniques Lachenmann has evolved over the course of his career and which serve to open-out the resources of the modern orchestra (strings or otherwise) such that the form of the piece is articulated in ways motivic development cannot necessarily provide. Form is central to Lachenmann’s music over the past three decades – with few, if any, of his works eschewing a semblance of recognisable ‘classical’ structure. In the case of Double, sonata-rondo seems to inform the unfolding of music whose sense of ‘return’ is reinforced by ideas that are transformed across its length: the outcome being an evolution over time that can readily be perceived as emerging into an intelligible, because fully coherent discourse.

Such intelligibility is, of course, dependent on the willingness of musicians to take on board the composer’s requirements and to realise them such that their musical and, yes, expressive functions are to the fore. All credit, then, to the string-players of the London Symphony Orchestra for responding so fully to Peter Eötvös in conveying the intricacy and force, also the poise and luminosity, of Lachenmann’s conception. The composer appeared well pleased with the result, a testament to what these players are capable of given adequate rehearsal time as well as the guidance of one who believes in the music.

In what was his LSO debut, Eötvös had prefaced the Lachenmann with Webern’s realisation of the six-part ‘Ricercar’ from Bach’s The Musical Offering. While not unfamiliar in the concert hall, this tends to be rendered as an exercise in shifting sonority with matters of expressive reach and formal momentum left out of account. Not, however, in this performance – capturing the music’s cumulative grandeur in no small measure. Moreover, the placing of woodwind and brass in front of the strings made for an unexpectedly swift transition between works, with no need for extensive platform rearrangement.

That the Lachenmann came about in the first instance was due in no small part to Maurizio Pollini, whose performance of Brahms’s First Piano Concerto reaffirmed his authority in a work long central to his repertoire. True, the technical infallibility which once informed his pianism is not quite what it was, but the sheer command that he invested into the vast opening movement – its widely diverging constituents audibly related to the one underlying tempo – left little doubt as to his integration of form and content. In the Adagio, his steadfast refusal to indulge the more-inward solo passages only strengthened the music’s prevailing nobility, while the finale brought not a little deft humour to bear on the forthrightness that, after an enviably poised cadenza which made explicit the nature of the change to the major-key, saw the work through to its vigorous yet affirmative close.

Unfamiliar as London audiences may be with seeing Eötvös in nineteenth-century music, his insight into this piece as well as skill as an accompanist were both evident from the outset – setting the seal on an auspicious debut with the LSO and what will hopefully be the start of an ongoing association.