Confronted with the serried ranks packing the Barbican Hall to its rafters, it was hard to imagine how deeply unfashionable both Sibelius and Mahler were in the post-war era (I can recall a Mahler concert in the Usher Hall, Edinburgh, around 1960 with Janet Baker, conducted by Alexander Gibson, that was attended by only a few hundred people). On this occasion, the juxtaposition of Sibelius’s Violin Concerto and Mahler’s Fourth Symphony not only ensured a full house but also worked well as programming.

To be frank, though, Leonidas Kavakos has given better performances of Sibelius’s Concerto – his playing took a little time to settle, but nothing he does is ever less than worth hearing. There is nothing self-regarding or meretricious about his playing, supreme command invariably placed wholly at the service of the music. As with Brahms’s Violin Concerto there has been a tendency for performances of Sibelius’s example to get slower and slower in the opening movement, conductors taking the moderato marking as an invitation to crawl. Valery Gergiev was not wholly guiltless in this respect but at least the London Symphony Orchestra’s playing radiated conviction whilst Kavakos’s account of the first-movement cadenza alone was worth attending the concert for.

Tempos were also problematic in the slow movement and the finale. Is it possible to play a movement marked Adagio di molto too slowly? Yes, if it becomes difficult to sustain the line. Similarly, the finale (marked Allegro, ma non tanto) was attacked at a pace which – although Kavakos despatched its pyrotechnics and double-stoppings with aplomb – was actually fractionally too fast to allow the full momentum of this “dance by polar bears” to emerge. One sensed that Gergiev was conducting a symphony rather than accompanying a concerto. All praise however to the horn quartet in the slow movement who produced some fabulously nuanced playing. 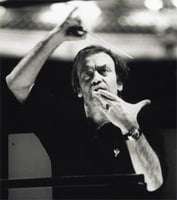 The performance of Mahler 4 was quite the most tasteless of this work that it has been my misfortune to hear. For once the tabloid-style cover of the programme got it right: “Gergiev’s Mahler”. This was an account which opened promisingly enough, Gergiev initially observing Mahler’s injunction not to hurry, but which soon lost its way in the thicket of Mahler’s careful markings with each one taken to extremes, alternatively dragged out or gabbled. It was also three notches too loud. To say that it screamed at one is something of an understatement: the climax of the first movement reached a decibel-level that tested one’s tolerance. Lacking any sense of an underlying base tempo, each incident seemed entirely unrelated to what had gone before or what came after, and consequently the movement as a whole seemed interminable.

Following a tedious account of the second movement, Gergiev failing to shape or sustain the ecstatic string line from Figure 11, the slow third movement, taken at a flowing tempo, was lacking in finesse with the cellos in particular sounding as though they could have done with another rehearsal (it’s not often one can criticise the LSO for the quality of its playing but this was scrappy). The successive changes in tempo – Allegretto subito, Allegro subito and Andante subito – were all misjudged so that when the final outburst arrived it was simply so much noise rather than the logical release of carefully accumulated tensions. The timpani-playing at this point was over-forceful and would have done service as the hammer-blows of the Sixth Symphony’s finale.

After an overly-distended pause – and no sign of the soloist – the finale, the child’s vision of Heaven, commenced at the slowest conceivable tempo. At least there was a certain logic to this since it gave Laura Claycomb 12 bars grace to wend her way through the violins before her first entry. Given Gergiev’s erratically extreme choices of alternating tempos thereafter, it was hardly surprising that co-ordination between soloist and orchestra was so tenuous. By the time of the work’s sublime closing paragraph – “Kein Musik is ja nicht auf Erden” (No Music on Earth can be compared to ours) – the tempo had been so dragged back that the work limped to its close.