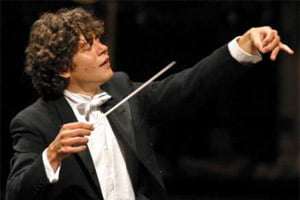 A protégé of such luminaries as Colin Davis and Simon Rattle, Robin Ticciati has been making a name on both sides of the Atlantic. This concert brought him together with the London Symphony Orchestra for the first time in a programme that, in the main, played to his undoubted strengths.

A rarity now in the concert hall compared to half-a-century ago, the suite that Sibelius drew from his incidental music to Adolf Paul’s “King Christian II” (1898) is among his most immediately attractive creations. Ticciati clearly felt so and, with the LSO’s playing at its most eloquent and unforced, gave the melodic generosity of ‘Nocturne’ its head as much as the expressive poise of ‘Elegy’ and disarming naïveté of the ‘Musette’. The ‘Serenade’ had the right gentle melancholy and if the ‘Ballade’ perhaps lacked the last degree of abandon its coursing energy certainly made a decisive conclusion.

Simon Trpčeski then entered for Grieg’s Piano Concerto (1869). Not that this performance was at all lacklustre or routine, but there seemed to be a relative absence of spontaneity and risk-taking suggestive of a lack of unity between soloist and conductor. The opening movement was rarely less than cohesive, but its development felt little more than the sequence of inconsequential glosses on its main themes for which it has frequently been condemned, while the climactic cadenza began hesitantly and amassed only a fitful intensity. The slow movement fared better overall, though a degree of heaviness in the phrasing meant that the return of its initial melody seemed unduly inhibited. The finale’s central section was distinguished by rapt flute-playing from Gareth Davies, with Ticciati summoning a good deal of incisiveness elsewhere, though his lack of familiarity with the Barbican Hall acoustic most likely explains his misjudgement of balance during an apotheosis in which Trpčeski’s contribution was largely inaudible. Hardly an outright failure as a performance but, equally, not the fresh take for which one might have hoped.

A short but finely conceived second half opened with Magnus Lindberg’s Chorale (2002) in which the LSO did full justice to those opulently-scored textural contrasts that provide a luxurious context for the same Bach chorale as deployed by Alban Berg in his Violin Concerto. Whether this highly superior encore touches any greater depths is debatable, though Ticciati ensured that its atmospheric six minutes were amply sustained.

Even better was to follow with Sibelius’s Seventh Symphony (1924). The archetypal one-movement symphony, Ticciati manifestly conveyed its overall seamlessness in an account that dovetailed persuasively between localised incident and long-term cohesion such that an underlying momentum was always detectable, with the trombone ‘motto’ afforded greater intensity on each of its three appearances. Less inevitable in his traversal than Osmo Vänskä in a recent London Philharmonic account, Ticciati convincingly integrated the symphony’s main sections and transitions so that the emphasis was firmly on the music still to come – with the finality of the closing bars making an admirable QED. The LSO has given many accounts of this piece in recent years, and this was certainly one with which to reckon.

Soon to become Principal Conductor of the Scottish Chamber Orchestra, Ticciati is evidently on a roll that will hopefully see him reunited with the LSO in future seasons. Certainly his musicianship and his interpretative insight were most often to the fore during this highly promising debut.