On October 6, Yo-Yo Ma, one of the true superstars among classical soloists, with the Mariinsky Orchestra and Valery Gergiev had given the opening night gala concert of the 2011-12 Carnegie Hall season, the first in a series of performances dedicated to “Tchaikovsky in St. Petersburg”. For its finale Gergiev invited Daniil Trifonov, one of the Grand Prize Winners of this year’s International Tchaikovsky Competition. 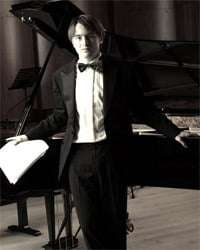 Born in Russia in 1991, currently a student at the Cleveland Institute of Music, during the 2010-11 season Trifonov also was awarded the Bronze Medal at the Chopin Competition in Warsaw, and First Prize at the Rubinstein Competition in Tel Aviv. His first recording, featuring works of Chopin, was released by Decca. Trifonov’s demeanor may be modest and unassuming, but as soon as he lunged into the opening chords of the Tchaikovsky it was apparent that he had taken control. Although slight of stature he obtained a rich, full sound from the piano without banging or forcing, even in the octave passage of the first movement which he executed at blazing speed. This was a young man’s performance, full of energy and drive, but never did one get the impression that Trifonov was simply aiming for effect. He almost became one with the piano, treating it as an extension of himself to project a highly personal vision of the piece. Pushing the tempo here, lingering lovingly there, he nevertheless made everything sound natural and refreshing.

Gergiev generally supported him in his approach, although there were minor ensemble problems. The opening tempo for the second movement was slightly fast, but Trifonov immediately calmed it down enough to make it seem right. He effortlessly and lightly tossed off the fast middle section, and the re-transition to the main theme was simply magical. Technique is simply not an issue for Trifonov, and he knows how to apply this freedom in the service of the music. In his two encores – Chopin’s Grand Valse brilliante and Liszt’s La campanella – the word “storyteller” kept coming to mind. Crouching in front of the piano, Trifonov knows how to get inside a piece and make it come to life. The Chopin was full of tasteful nuances and literally danced, while the Liszt showed off Trifonov’s incredible passagework and control of structure.

Shostakovich was a year younger still than Trifonov, just nineteen, when he composed his First Symphony, yet the voice of the mature composer is already in evidence, making it one of the most remarkable first symphonies in the repertoire. Although the Mariinsky Orchestra plays mainly opera and ballet, the musicians seemed thoroughly attuned to it. Gergiev, eschewing a podium, elicited a very atmospheric, transparent performance with outstanding contribution from lead violin, flute, trumpet, cello, piano and timpani. The strings supported the oboe solo in the third movement with a wonderfully delicate, atmospheric sound, but the orchestra could also roar with great energy and rhythmic precision.

The concert had opened with three selections from Prokofiev’s ballet Romeo and Juliet, similarly displaying committed and idiomatic playing and notable woodwind solos, especially from the bassoonist in ‘Friar Lawrence’. As an encore one expected the concert to come full-circle with ‘The Death of Tybalt’. However, Gergiev chose Liadov’s Baba Yaga, and then a vibrant, spirited account of the Polonaise from Tchaikovsky’s Eugene Onegin.