Sweet Smell of Success
Musical based on the 1957 film, with music by Marvin Hamlisch, lyrics by Craig Carnelia, book by John Guare [British professional premiere] 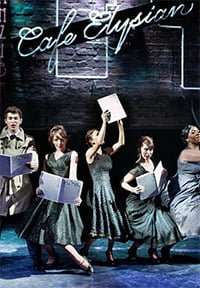 The origins of Marvin Hamlisch’s musical version of Sweet Smell of Success lie in the film starring and co-produced by Burt Lancaster and Tony Curtis. Lancaster played J. J. Hunsecker, a US gossip columnist, with Curtis as his sidekick. The film was based on Walter Winchell, a columnist on the New York Daily Mirror from 1929 to 1963 who turned gossip into news read by fifty-million people a day and listened to by twenty-million on his Sunday-night programme. He was powerful, influential and a man to be feared by public figures. Although he was against fascism, the Nazis and the Ku Klux Klan, he was also against Communism and supported Senator McCarthy in his witch-hunt for ‘reds under the bed’.

The 1957 film was directed by Scottish-American director Alexander Mackendrick, noted mainly for his work at Ealing Studios (Whisky Galore!, The Man in the White Suit, The Ladykillers), and was based on Tell Me About It Tomorrow, a novella by Ernest Lehman published in Cosmopolitan in 1950. Lehman began writing the screenplay but became ill, Clifford Odets taking over the writing of to which Mackendrick contributed. Orson Welles was to have starred but Lancaster had more commercial pull, and his company was one of the co-producers. Curtis wanted to change his lightweight image by playing more dramatic roles. He won the part of Sidney Falcone, an ambitious and conniving press agent. Susan Harrison played Hunsecker’s sister Susan and Martin Milner was her jazz-musician love, Dallas, a part offered to Robert Vaughn, until he was conscripted. 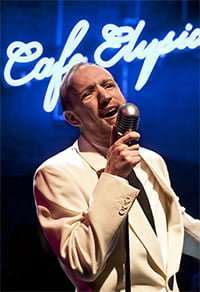 Forty years later a musical version of the film was mooted but it took another four years for it to reach Broadway. In 1998 Nicholas Hytner (of National Theatre fame) directed a workshop of the show in Toronto. Later the same year there was a reading in New York with Jonathan Pryce as Hunsecker and Brian d’Arcy James as Falcone. It had a tryout season in Chicago in January 2002 and finally opened in New York in March with John Lithgow as Hunsecker and James as Falcone. It notched up fewer than 130 performances, although it still received seven Tony Award nominations. Since then it doesn’t appear to have played anywhere until now. The current production is the British professional premiere.

Marvin Hamlisch, who died in August 2012, was responsible for the groundbreaking and Pulitzer Prize-winning show A Chorus Line. His stage musicals after that never repeated the same success, although his otherwise brilliant career included the composition and arranging of many famous film scores (The Way We Were, The Sting) and he had a busy conducting schedule for Barbra Streisand and Linda Ronstadt. His superbly strong score for Sweet Smell of Success has brilliantly incisive lyrics by Craig Carnelia and a dark, edgy book by John Guare that evokes well the paranoid period of the early 1950s. In its black comedy tone it recreates the sleazy atmosphere of the original film and its portrayal of gossip-mongering.

The show is set in 1952, a time of the Cold War between the US and the Soviet Union, the Korean War and with the imagined threat of Communism infiltrating American society. J. J. Hunsecker works in and around the hotels, clubs, cafes and dark alleyways of New York where gossip is rife and press agents fight to get news into tomorrow’s paper. McCarthyism was at its height with the HUAC trials endeavouring to force the famous to name names, much against the wishes of President Dwight Eisenhower. Hunsecker digs for dirt everywhere, particularly in the lives of politicians, policemen, and the famous of Broadway and Hollywood. He’s thinks his newspaper column is the “heartbeat of America”. Totally without scruples, his one fixation is on his sister Susan. He will go to any lengths to keep her from associating with men he considers inappropriate. As he says “it’s impossible for a man to be just a friend with a girl.” 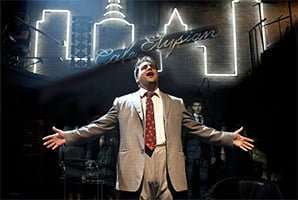 Hunsecker takes on Sidney Falcone who wants a column of his own. He too will do anything to promote his career even down to prostituting his girlfriend Rita to an advantageous punter. There is something disturbing in the state of New York, a truly rotten ‘Big Apple’. Could this be why the original production flopped? Mehmet Ergen has succeeded where Broadway failed. As Hunsecker, David Bamber exceeds all expectations – he is often cast as mild and meek – and here grabs the role and runs with it hell-for-leather with immense power and concentration. A parody of evil becomes tellingly true to life and almost likeable in a perverse sort of way. Even Lancaster veered towards caricature, but Bamber never does. As an ex-vaudevillian Hunsecker is given a wonderfully riotous song called ‘Don’t look now’, Bamber putting it across with immense passion and humour – and he can dance, too! Hunsecker’s obsession with Susan knows no bounds and he makes sure that Sidney takes care of anybody likely to come between him and his sibling. As Falcone, Adrian der Gregorian acts and sings up a storm. In his big number, ‘At the fountain’, he dreams of being discovered and making it big; this show now seems about Sidney and not his boss.

Excellent support comes from Caroline Keiff as Susan, Stuart Matthew Price as Dallas, Celia Graham as Rita, and an ensemble of singers and dancers who are pitch-perfect in every respect, while the choreography by Nathan M. Wright is right on the button, beautifully turned out. The show looks a treat with its 1950s-style designs by Mark Bailey pointing up both the bright and dark sides of New York. David Howe’s lighting design is evocatively atmospheric and Ed Borgnis’s sound-design is one of the clearest I have heard.

From the very first notes of Hamlisch’s punchy score you are in a presence of a classic American musical. Even with just seven musicians, it’s a big-band sound stunningly arranged by Tom Kelly that recalls the heady days of the 1950s and shows such as Guys and Dolls, The Pajama Game, Damn Yankees, The Music Man, West Side Story, and Gypsy. There is a clutch of brilliant songs and what London has been missing, a great, new, old-fashioned American musical.