New Adventures, Matthew Bourne’s contemporary dance/theatre touring company, has been in existence for some twenty years. It began life as Adventures in Motion Pictures in 1987 and for the next fifteen years produced a body of new work that was always impressive. A mixture of original pieces and new productions of traditional favourites such as “Nutcracker!” and “Cinderella” included a major highlight in 1995, the premiere of “Swan Lake” with its controversial all-male chorus. In its time this production has won some thirty awards including the 1996 Olivier Award for Best New Dance Production and three Tony Awards in 1999. Matthew Bourne’s company has taken this production around the world and in twelve years performed it more times than the Royal Ballet has in its seventy-year history. Since then there have been major new productions of “The Car Man”, “Play Without Words” (for the National Theatre), a new “Nutcracker!” (which returns to Sadler’s Wells this Christmas), “Highland Fling”, which is a new version of “La Sylphide”, and “Edward Scissorhands”.

“The Car Man” first appeared in 2000 and now returns to Sadler’s Wells. Asked why he was attracted to Bizet’s “Carmen”, Matthew Bourne has said: “… it was the right kind of music for my company … it suggested a different kind of movement than we have done before.” In order to produce something different to the opera, Bourne decided to tell a different story that is full of suspense. At the risk of alienating his audience, just as Bizet’s original had in 1875 – they thought it too immoral to be staged – Bourne has kept the basic ingredients of lust, passion, revenge and murder and turned it into a dance thriller. Think “West Side Story” crossed with “The Postman Always Rings Twice” and you just about have it. 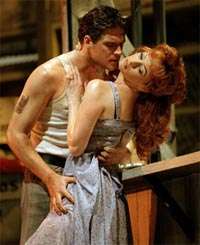 Carmen, originally the heroine, is now the Car Man, the hero. The opening scene is set in a garage/diner in Harmony, USA, population 375. Dino Alfano and Lana, his wife, run it. He’s a dumb ox but she’s a sexy piece and as soon as Luca drifts into town they are soon jumping on each other’s bones. Luca drifts in many directions and after he’s finished with Lana, he’ll just as easily shack up with Lana’s sister’s boyfriend, Angelo, in the back seat of a car. These scenes are presented with a great sexual tension, followed of course by the inevitable jealousy and revenge. Bourne’s choreography, every bit as wayward and original as, say, George Balanchine or Jerome Robbins were in their day, certainly makes up for the lack of a sung libretto.

The music is the orchestral arrangement of Bizet’s score by Rodion Shchedrin, a forty-minute ballet version written for strings and percussion. Terry Davies has expanded it into a full-length dance piece that works extremely well and which keeps the company literally on their toes. The dancing is something else again with all the moves seeming so very natural, lifelike and spontaneous. Sometimes you expect or perhaps think you actually hear dialogue being spoken (as the Northern Ballet Theatre version of “Carmen” did), but here the story is told totally in terms of dance.

It is invidious to single out individual members of the company, because the whole ensemble is so brilliant, but of the principal cast members, Alan Vincent smoulders as Luca, Michela Meazza is a sexy broad along Penelope Cruz lines, Sam Archer a sadly tragic Angelo and Hannah Vassallo a sympathetic Rita. Scott Amber’s Dino is a figure of fun that never crosses the border into caricature.

Should another production of “West Side Story” loom on the horizon, I am sure Matthew Bourne would be the best man for the job of directing it. He has such a forceful way with his choreography, with nothing wasted and no padding, that he could reinvent the musical for the 21st century.