“It’s like that with the singer, who sings and marvels inwardly – what God has quietly created astonishes both him and you.”

The poet Mayrhofer’s tribute to Schubert, who set forty-seven of his poems, is an apt reflection on Matthias Goerne’s performance, which seems guided by a sense of inward reverence towards both music and poetry. All but one of the songs in this rapturously received recital were composed to poems by either Mayrhofer or Goethe: that the former threw himself out of a third-floor window to his death and the latter confessed of “Die Leiden des jungen Werthers” that he had “shot his hero to save himself” will give a sense of the general flavour of most of the songs – suffice to say that, life-enhancing though the singing and playing were, the overall atmosphere was of Sturm und Drang.

It’s almost a tautology to write that Goerne has the most beautiful baritone voice around, and that it’s used with the kind of skill which renders you awed – in song after song, you marvel at the intensity of the interpretation, the almost unbelievable length of his breath, the unforced legato and perhaps most of all the stunning pianissimos in which this majestic voice is scaled down to a thread of sound so intimate that it is like receiving a private confidence – but a confidence that is still audible even at the back of the hall.

‘Die Sternennächte’ and ‘Abendstern’ were perhaps the finest examples of Goerne’s skill: the former, with its seraphic melody set high in the voice, taken with daring slowness, “Durch die Ferne!” breathed with deepest intensity, and the latter, with its changes from major to minor and its hushed accompaniment, caressing the wonderful lines “Ich bin der Liebe treuer Stern / Sie halten sich von Liebe fern” (I am the faithful star of love, they keep themselves aloof from love’) with unforgettable poignancy. 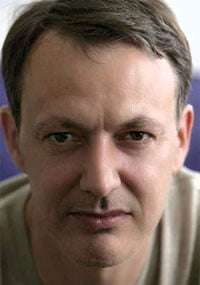 The all-Goethe second half centred on a tremendous performance of ‘Gesänge des Harfners,’ the A minor melodies bringing ‘Der Leiermann’ to mind in almost every line, and the singing a miracle both of tenderness and disenchantment – Goerne makes you confront the cruelty of the Harper’s existence both in his narration and his management of the searing fortes at such moments as “Ja! lässt mich meiner Qual!” and “Denn alle Schuld rächt sich auf Erden”.

Neither ‘Der Fischer’ nor ‘Wilkommen und Abschied’ were conventionally light-hearted, both being taken fairly spaciously and with the emphasis in the latter more on the fervour of love than is usual, the outburst at “ihr Götter!” savoured affectionately, the diminuendo in the repeat as skilful as the forte in the first phrase. ‘Nähe des Geliebten’ was simply wonderful – impeccable legato, the sense of rapture in the swelling of “Ich bin bei dir” and the longing of “O wärst du da!” conveyed more finely than I have ever heard.

Throughout the recital, Eric Schneider provided sensitive, poetic support for the voice, nowhere more so than in the many songs where the piano is called upon to evoke either the swell of waves or the rippling of water: ‘Lied eines Schiffers an die Dioskuren’ was a marvel of partnership between singer and pianist.

If you want lollipops you do not go to Goerne: if you seek a recital which epitomizes the summit of the art of Lieder, then the Wigmore Hall was where you wanted to be this Friday night … and this Sunday evening, this time with Alexander Schmalcz as pianist.