my mother, my dog and CLOWNS!
David Bowie – [Blackstar, Future Legend, Chant of the Ever Circling Skeletal Family, Aladdin Sane] 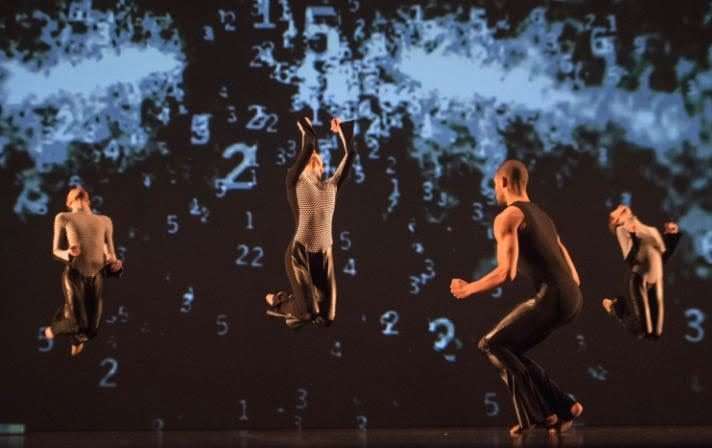 Michael Clark will forever be seen as an iconoclast, forever been referred to as one if the ‘bad boys’ of dance, the choreographer and performer who sets out to shock and to provoke. And yet, that is to pigeon-hole one of this country’s most intriguing and most serious artists of recent times. In his early years Clark indulged in much that would cause heads to shake and fingers to wag, but he has also proved to be a tireless experimenter and creator in the medium of dance. Not all works, not everything is a success, but he continues to beat his own path in terms of movement and to develop and refine his own aesthetic.

His latest programme at the Barbican showed him, in one piece at least, on blistering form. Satie Studs/Ogive Composite is an extraordinary reaction to Erik Satie’s uncompromising composition. Clark admits to being influenced by Frederick Ashton’s peerless Satie ballet Monotones I and II, and there can be no higher praise to state that, within his own dance language, Clark approaches the Old Master in the distillation of movement to its purest form. Clark is more of an angular choreographer, moulding his dancers into poses redolent of Art Deco – limbs fully stretched out or akimbo, faces blank, almost serene. Much is based on Classical Ballet pose and position, subtly fused with the more modern, contemporary; while ballet focusses on upward movement, often leaving the stage surface, Clark brings a weightiness which seems to pull the performers down. In this work stasis is given equal billing as movement: he power of pose, the willingness to allow a body’s shape to register on the eye and brain, is something many, most, dance makers either do not understand or choose to ignore but Clark understands it and uses it to powerful effect. He is well served by his company of dancers, utterly fluent in his particular idiom and entirely at the service of his invention. As Satie’s chords crash out, the dancers move slowly, purposefully, clad simply in black and white body suits, the choreography noticeably androgynous for the most part, gender difference (so important in Classical Ballet) almost erased. It is cool, detached even, but the outpouring of the movement is engaging, mesmerising, and the tension never sags. 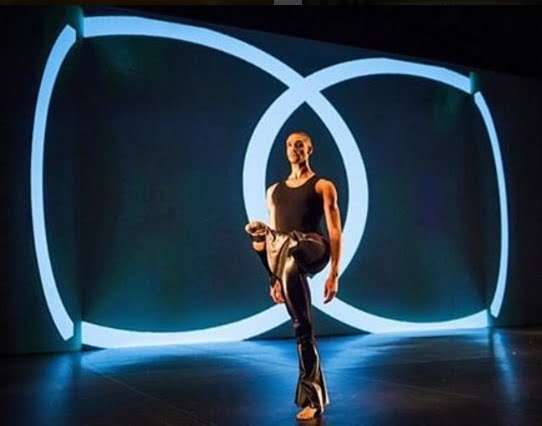 Land, set to three Patti Smith songs, is less successful, Clark’s detached and controlled movement at odds with the baroque freedom of the soundtrack. It is visually startling, primarily owing to the extraordinary projections behind the dancers, an adaptation of Charles Atlas’s Painting by Numbers first seen as a video installation in 2010. We see much of the same approach to movement as in the previous piece, and while this creates undoubted tension because of the apparent mismatch between what we see and hear, the relationship between the two is not always convincing.

my mother, my dog and CLOWNS! is a typically obscure title from Clark, in essence his reaction to four songs by the late David Bowie. Visually, again, it is striking, with the dancers clad in subtly shaded metallic body suits which take on the hues of the bold washes of colour which characterise the lighting design. Again, the weighty, detached style is to the fore, and, as with Land, initially does not always convince. But Clark adds more – one dancer appears in pointe shoes (all dancers are, as in the other two works, barefoot) and blindfolded , making for an intriguing addition. Likewise, we see two characters, one female at the very beginning, one male (Clark himself) half-way through, dresses in sombre, almost everyday clothes. The tipping point comes when the stage empties to allow Oxana Panchenko to indulge in an increasingly wild solo, seemingly shaking off the hyper-control that has characterised the work and the entire evening, thus far. It brings a sense of liberation and sets the tone for the closing moments of the work when other dancers enter and perform freer, more rhythmically obvious movement, sways and sashays, with finger-clicking which brings a sense of smiling irony to the work’s end.