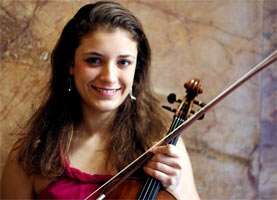 As winner of the 2010 Lionel Tertis International Viola Competition on the Isle of Man, Milena Pajaro-van de Stadt was entitled to a Wigmore Hall recital – and full marks to her for playing a largely unhackneyed programme. (Those of us who love the viola groan inwardly when we see yet another selection of the same handful of works advertised. No wonder the quite unjustified assumption is sometimes made that the instrument has no repertoire.)

Pajaro-van de Stadt featured just one Certified Viola Classic, Schumann’s Märchenbilder (Fairy Tales), which she delivered with warm, even tone, supple rhythm, easeful bowing and considerable feeling, enhanced by finely judged portamento. The final movement, with Sophia Rahman providing a firm but sensitively romantic backdrop, was as moving as it should be.

Roger Steptoe’s Sonatine I for solo viola was the set-piece for the competition and Pajaro-van de Stadt is credited with giving the premiere. An excellent piece which uses the whole compass of the instrument, it has already achieved an independent life, with performances in France, the US and elsewhere. This performance, billed as the UK premiere (presumably the IOM counts as foreign), was superb and clearly delighted the composer. I was not sure about the wisdom of following it directly with the other unaccompanied work of the evening, Penderecki’s Cadenza, but Pajaro-van de Stadt played it so well that any criticism was silenced.

Hindemith’s posthumously published Sonata made little impression on me when I first heard it years ago, but I suspect those early readings were not very good. Today’s generation seems to breeze through it, and on this occasion the unrelentingly busy figuration of the outer movements was cleverly transformed into musical meaning by a well-rehearsed interpretation. Both artists – the piano has a heavy load in this work – were eloquent in the slow central movement.

After the break we had William Bergsma’s 1961 Fantastic Variations on a Theme from Tristan und Isolde, written for William Primrose. I wonder if he suggested the stratagem, previously utilised by Frank Bridge and his pupil Benjamin Britten, of revealing the theme – the sailor’s song from the opening of the opera – only after the variations. Some American violists play this well-crafted piece but I have never previously heard it in a recital and I know of only one recording. Pajaro-van de Stadt obviously believes in it and knows it well: she made its many difficult intervals sound quite natural.

Henri Vieuxtemps’s big B flat Sonata takes a lot of playing, even though the object is to make it sound effortless. Pajaro-van de Stadt did not quite achieve that aim – she betrayed one or two unimportant signs of fatigue – but at her best she shaped the charming themes with glowing tone. The slow movement was lovely. A more experienced recitalist would have stopped there and made the final item, Paganini’s La campanella, an encore. Here again there were one or two tired moments but in general it was a delightful rendering, with excellent harmonics, nicely calculated rubato and accurate spiccato. The real encore was an arrangement of Schubert’s song “Allerseelen”, beautifully played by both artists.

Pajaro-van de Stadt is of mixed Colombian and Dutch parentage. Aged 22 and studying at the Curtis Institute in Philadelphia with Roberto Diaz and Michael Tree, she is a member of the Old City Quartet. Her viola is a fine modern instrument, copied from Primrose’s Amati. With a pleasing platform manner and an even more pleasing reluctance to throw herself about the stage, as too many of her contemporaries do, she should have a great future.