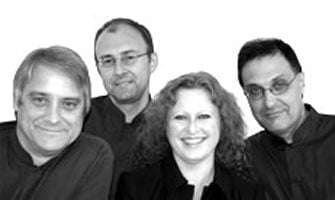 This concert marked the end of Sir Peter Maxwell Davies’s five-year project to write ten string quartets for the Maggini Quartet to be recorded on the Naxos label. Maxwell Davies has been nothing if not attentive to the long-term compositional possibilities offered by such a venture, and it was of interest as to whether the Tenth Naxos Quartet (2007) would be a conscious summing-up of the series or a searching out of new potential within the medium.

What resulted is a relatively modest (27-minute) piece that, while seeming to acknowledge its predecessors, could equally prepare the ground for a whole second cycle.

Davies has indicated that each of the five movements is based on Scottish dances from the Baroque era; certainly the work has a rhythmic flexibility and animation not always evident in earlier of the series. The first movement is a ‘Broken Reel’ that moves between ideas of greater or lesser vigour before fracturing into nothingness near the close. Next comes a ‘Slow Air and Rant’, brief in duration but with the shift between its initial repose and explosive conclusion suggesting a far bigger entity. The ensuing’Passamezzo Farewell’ is as deeply felt and powerfully sustained as any slow movement Maxwell Davies has written; moving towards two climactic points – the second of which feels to be that of the work itself – before returning to its initial contemplation. The fourth movement is another brief and disruptive intermezzo, its skewed dance measure redolent of the parodies that were synonymous with Davies some four decades ago. The finale utilises the rhythm of a hornpipe to steer the music forward, passing through a calm recollection of earlier material to a vibrant conclusion that stops in mid-air: a telling non-conclusion to perhaps the most substantial achievement of Davies’s later years.

The Tenth Naxos Quartet was persuasively given by the Maggini, whose new leader Lorraine McAslan seems to have settled securely into her role and who clearly relished the challenges – technical and interpretative – of the piece. One looks forward to the final recorded instalment of the cycle, enabling a complete run-through of all ten quartets. A live performance of such is probably too much to expect from the Maggini, who will hopefully include these pieces in future concerts. Equally important is that other ensembles take them up – so building on the performing tradition that the Maggini has started.

Framing the Maxwell Davies were quartets from the very core of the classical tradition. The Maggini has not always seemed at ease in Haydn, but its account of the F minor from the Opus 20 set did justice to one of his most bracing works for the medium.

The anxieties that beset its opening Moderato were deftly emphasised, as was the close-knit motivic unity of the Minuet and the expressive but latterly distracted polyphony of the Adagio. The double fugue that constitutes the finale can feel peremptory in context, but its contrapuntal intricacy as well as its intensive interplay was amply conveyed here.

After the interval, the third of Beethoven’s ‘Razumovsky’ quartets took some time to recover from an intonationally suspect introduction and an Allegro that never quite cast off its initial inhibition. Nor was the Andante an especial success, its distanced intensity not so much circumspect as muted. The‘Menuetto’ was better in conveying the movement’s teasing play on those of Beethoven’s forebears, while the fugal finale built a fair momentum through to its scintillating close. Overall, though, this was an unexpectedly tepid conclusion to a series that has given the Maggini the proflle it fully deserves.