Alan Gilbert led the New York Philharmonic in a program of vivid orchestral and vocal colors. Steven Stucky has ongoing relationships with several American orchestras, most notably the Los Angeles Philharmonic, and he has introduced music to New York Philharmonic audiences. In Son et lumière he uses intense colorations to suggest the ‘sounds and illuminations’ of castles, monuments and ruins. The nine-minute work is scored for a large orchestra that includes an augmented wind section and a huge array of percussion, and features interesting juxtapositions of rhythms, tempos and instruments. This is the sort of composition Gilbert seems to love best, and at which he excels, here drawing from the NYP a precise and incisive performance. 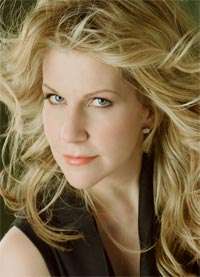 When Berlioz completed his scoring of the six Théophile Gautier poems that he had composed for voice and piano some fifteen years earlier, Les nuits d’été became the first-ever orchestral song-cycle. This highly romantic work is performed fairly often, but rarely as effectively as in this performance by Joyce DiDonato, accompanied by a reduced orchestral complement that Gilbert carefully kept in perfect balance with her vocal line. Her phrasing was exquisite and her voice retained both richness of tone and projection throughout her range, from a whisper to full-voiced intensity.

After opening the cycle on an airy and optimistic note in ‘Villanelle’, DiDonato sang ‘Le spectre de la rose’ with an unhurried, breathless quality – at “parfum” one could almost sense the flower’s aroma. The mood changed to a sensitively expressed lament in ‘Sur les lagunes’, the ending dying away quite movingly, and in the plaintive ‘Absence’ DiDonato found subtle ways to impart variety to the recurring refrain. In ‘Au cimetière: clair de lune’, she brought home the irony of being both attracted to and repelled by the moonlit graveyard, as Robert Langevin’s flute and string harmonics depicted its eerie atmosphere. Finally, in the breezy ‘L’île inconnue’, DiDonato had us ready to sail away with her to anywhere at all!

Mussorgsky’s Pictures at an Exhibition deals with visual imagery differently than either the Stucky or Berlioz. Son et lumière is completely abstract, leaving visual associations entirely to the listener, and in Les nuits d’été Berlioz’s music interprets Gautier’s verbal suggestions of visual images. Mussorgsky’s music, however, is based on a group of very specific paintings created by his friend, the artist Victor Hartmann. Unfortunately, most of the Hartmann works that inspired Mussorgsky have been lost or destroyed. Ravel’s familiar arrangement adds a new layer of orchestral detail to Mussorgsky’s already expressive writing for the piano.

This is a work to which the old maxim, ‘familiarity breeds contempt’ is often applicable, but Alan Gilbert succeeded in infusing this performance with life and interest, and the Philharmonic’s musicians demonstrated their virtuosity at every turn, beginning with Philip Smith’s bright trumpet solo as the ‘Promenade’ begins, and soon afterward Philip Myers’s mellow rendition of that theme on the horn. Also notable were solos by saxophonist Albert Regni in ‘The Old Castle’, Alan Baer on tuba in ‘Bydlo’, and Smith again in ‘Samuel Goldenberg and Schmuyle’. The Philharmonic’s string and wind sections performed excellently, combining to fine effect in ‘Tuileries’, ‘Ballet of the Unhatched Chicks’ and ‘Marketplace in Limoges’. The brass chorale in ‘Catacombs’ created an appropriately mysterious atmosphere, and the brass and percussion excelled in exciting renditions of the rhythmic ‘Hut on Fowl’s Legs’ and the powerful finale, ‘The Great Gate of Kiev’, in which Gilbert and the orchestra held nothing back.