Camelot
Musical with book and lyrics by Alan Jay Lerner and music by Frederick Loewe based on T. H. White’s novel “The Once and Future King”; orchestrations by Robert Russell Bennett 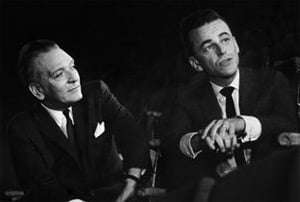 Lerner & Loewe’s “Camelot ” is the fifth musical performed by the New York Philharmonic since its 1985 performances of Sondheim, James and Goldman’s “Follies”. And just as the team of Lerner & Loewe followed up their 1956 smash hit “My Fair Lady” with “Camelot” in 1960, the New York Philharmonic followed up its 2007 sold-out run of “My Fair Lady” with this semi-staged production of “Camelot” (the other musicals performed by the Philharmonic were “Sweeney Todd” and “Candide”).

The original Broadway production of “Camelot,” a musical tale of love and war in Arthurian England based on T. H. White’s “The Once and Future King”, was a highly successful stage vehicle for Richard Burton, Julie Andrews and Robert Goulet. The show ran on Broadway for 873 performances, followed by two years on the road in the US, two more in London, and a further two in Australia, won four Tony Awards, enjoyed three Broadway revivals and was made into an Oscar-winning film in 1967 starring Richard Harris and Vanessa Redgrave. The original cast album ruled as America’s top-selling LP for 60 weeks.

In contrast to White’s five-volume novel, filled with witty anachronisms and marked by a tragically elegiac tone, Lerner & Loewe’s musical is a brief, sentimental snapshot of the love triangle of King Arthur, Sir Lancelot and Queen Guinevere. The beautiful score boasts an array of memorable tunes, including the eponymous title song performed by King Arthur, and Sir Lancelot’s unforgettable ‘If Ever I would Leave You’ and some sophisticated purely orchestral music.

Though billed as a “semi-staged” concert version, this production of “Camelot” is in fact a somewhat elaborate show. The 70 or so orchestra-members were placed at the back of the stage, the cast performed on a slightly raked, movable platform (which at one point rose dramatically to serve as the Round Table where King Arthur convened his legendary knights), and a gigantic, illuminated crown was suspended over the stage.

The colorful costumes by Tracy Christensen were a mixture of the modern and the medieval and, like the stage design, elaborate enough to stimulate the imagination, but not outshine the show’s musical and dramatic ideas. Under the baton of Paul Gemignani, the New York Philharmonic players gave a resplendent performance of the award-winning score. 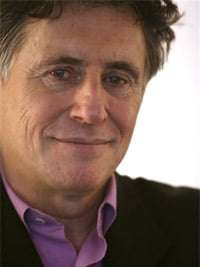 The renowned stage and screen actor Gabriel Byrne played the role of King Arthur. This was Byrne’s first foray into musical theatre, and he was, unfortunately, miscast. While he successfully conveyed Arthur’s anxiety and dedication to the idea of establishing the Round Table of knights who fight for the right, he was clearly uncomfortable performing Arthur’s songs, and lacked the requisite power to convince as the legendary warrior-monarch. Created for the great Richard Burton (the part won him a 1961 Tony as “Best Actor in a Musical”), the role does not call for a ‘real’ singer, but it does require a powerful personality with a commanding voice that can declaim the lines in time to the music. Bryne seemed overly tentative in his musical numbers, constantly rushing his mostly spoken, but occasionally sung lines, and often finishing them several beats ahead of the orchestra.

The other two leads were perfectly cast. Marin Mazzie made a gorgeous Guenevere. Her singing was dazzling, and she strongly conveyed the winsome queen’s torment in her unfulfilled love affair with Sir Lancelot. Nathan Gunn made an appropriately dashing Sir Lancelot. Justly famous for both his vocal expertise and his acting, Gunn is a regular in many of the world’s leading opera-houses including the Metropolian, but this was his first journey into musical theatre. As the cocky and passionate French cavalier, he aptly conveyed his character’s development from an arrogant aristocrat, enamored of his own looks and abilities, to a self-sacrificing knight torn by the conflict between his love for his queen and devotion to his king. Highlights of his performance were an appropriately tongue-in-cheek rendition of ‘C’est Moi’ and an ardently stylish account of ‘If Ever I Would Leave You’.

Veteran actor Stacy Keach was a strong, sagacious Merlin, and Christopher Lloyd made the most of his part as the doddering, perplexed Pellinore. As King Arthur’s loyal knights, Christopher Sieber as Sir Dinadan, Marc Kudisch as Sir Lionel, and Will Swenson as Sir Sagramore all gave engaging, well-played performances. Bobby Steggert was the villainous Mordred. Outrageously costumed as a transvestite punk, he performed ‘The Seven Deadly Sins’ with great flair. Fran Drescher did a short but hilarious turn as a whiney-voiced Morgan le Fey.

All in all, this was a highly enjoyable matinee performance, which was followed by an evening presentation, as well as a wonderful opportunity to hear Frederick Loewe’s magnificent score sumptuously rendered by the New York Philharmonic musicans.