Rafael Frühbeck de Burgos led the New York Philharmonic in a concert that featured the sparkling virtuosity of Augustin Hadelich in Édouard Lalo’s Symphonie espagnole, and a performance of Berlioz’s Symphonie fantastique that grew in intensity and ended spectacularly. 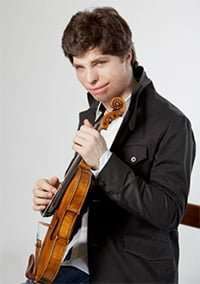 Lalo’s ‘symphonie’ is certainly not that, but neither is it a typical violin concerto. The work’s essence lies in its Spanish dance rhythms – habanera, boléro, seguidilla and malagueña – all captured by Hadelich with wonderful musicality. I am always nervous as a performance of this difficult-to-play piece begins, dating back to the first time I heard it played, over fifty years ago, by Zvi Zeitlin (recently deceased), whose tone cracked badly on his opening high E. But I need not have worried about Hadelich, who hit that note squarely and met all of the ensuing technical challenges, right through to the alternating trills and pizzicatos that conclude the work. The marvelous sound that Hadelich elicited from his 1723 Stradivarius was most notable in the (happily included) ‘Intermezzo’, where the internal dialogue between the instrument’s upper and lower registers was projected with equal clarity and richness of tone. Frühbeck was careful to keep the orchestra in sync with Hadelich’s rhythmic embellishments and allowed the violin to soar unhindered by the sometimes ponderous orchestral accompaniments and tutti passages.

The Philharmonic sounded much better in the Berlioz, with every section delivering the virtuoso playing that this work requires. The five movements of Symphonie fantastique portray a series of adventures fantasized by a lovesick musician, with his beloved represented by an idée fixe theme.

In the opening movement, ‘Reveries, Passions’, the winds and strings were superb in the introductory Largo and first appearance of the recurring theme. Frühbeck skillfully managed rhythmic and dynamic changes to give dramatic effect to the music’s changing moods, releasing tension in the movement’s introspective conclusion. In ‘A Ball’, the infectious waltz played by the strings and a pair of harps was sweetly interrupted by the idée fixe on the winds before the dance resumed and drove to a whirlwind finish.

Then, as the ‘Scene in the Fields’ began, the Swiss shepherds’ tune, ranz des vaches, was beautifully played on cor anglais by Keisuke Ikuma and answered from off-stage by Liang Wang’s oboe, as if by another shepherd on a distant mountain. Later, four timpanists simulated a distant thunderstorm that prevented a response to the cor anglais’s reprise of the tune, bringing the movement to a poignant close. In contrast to his delicate treatment of this movement, Frühbeck found energy for ‘March to the Scaffold’, the brass and percussion sections coming to the fore in brilliant form. Soft-malleted timpani and four bassoons chattered away delightfully before the stirring march theme arrived, led by the trumpets and cornets à pistons. A brief, haunting clarinet solo recalls the beloved, before drum-rolls, brass and wind chords, and finally the strings, mark the fall of the guillotine.

The concluding ‘Dream of a Witches’ Sabbath’ increased the level of excitement still further. After brass chords and short outbursts from Mindy Kaufman’s piccolo interrupted the initial rumble of the cellos and double basses, a wildly rollicking variation of the idée fixe was marvelously played by Pascual Martinez Forteza on E-flat clarinet, accompanied by the rest of the wind section, with the strings, horns and brass soon joining in. The Philharmonic’s superb set of bronze church bells sounded offstage as first the bassoons and tubas, and then the horns and trombones, intoned the ‘Dies Irae’, making a beautifully resonant sound. This was followed by the fugato ‘witches’ round dance’, the marvelous strings accented by brass and then wind chords. Soon the ‘Dies Irae’ and the round-dance were woven together, with a col legno passage for the violins and violas adding a macabre accent. Frühbeck took the dash to the symphony’s ending at a rapid pace and at full volume, producing a sound that made one forget the shortcomings of Avery Fisher Hall’s acoustics.