Adapted for the stage by Emma Rice from Noël Coward’s one-act play Still Life and his screenplay for the 1945 film Brief Encounter, directed by David Lean 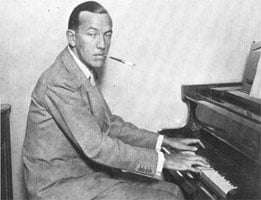 The Noël Coward industry shows no signs of abating. The National Theatre has just finished a revival of “Present Laughter” with Alex Jennings as Garry Essendine and there’s also an exhibition there called “Star Quality: Aspects of Noël Coward”. Coward’s Letters have just been published and there’s also a collection of Coward’s plays out on DVD. Peter Hall’s production of “The Vortex” with Felicity Kendall begins previews at the Apollo Theatre, Shaftesbury Avenue from 20 February and the Cineworld Cinema in Haymarket has reverted to being a theatre (it was originally built as one in 1927) to present a stage version of David Lean’s 1945 film “Brief Encounter”, which starred Celia Johnson and Trevor Howard.

For the screenplay Coward expanded “Still Life”, one of his ten one-act plays that made up three theatrical evenings in 1936 under the title of “Tonight at 8.30” which starred Coward and Gertrude Lawrence. The new version of “Brief Encounter” is by the Cornwall-based Kneehigh Theatre company that last year presented an adaptation of another classic British film, “A Matter of Life and Death”. In the past it has also tackled “The Red Shoes” and is currently touring “Rapunzel” and taking Shakespeare’s “Cymbeline” to Bogota and Sao Paolo. 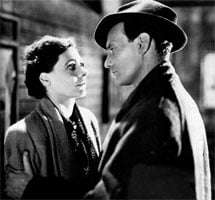 “Still Life”, the original version of “Brief Encounter”, is rarely performed now, although, as part of its Coward celebrations, the National Theatre last month held a rehearsed reading of the play with Alex Jennings and Harriet Walter, while on Valentine’s Day Celia Johnson’s daughter, Lucy Fleming, talked about her mother’s performance in the film. This was followed by a free outdoor screening of “Brief Encounter” on the fly-tower of the National Theatre, while two ‘characters’ from the film, Myrtle Bagot and Beryl Waters, served tea, coffee, buns and cakes. Ah, nostalgia, there’s nothing like it, is there?

A similar thing happens in Kneehigh’s adaptation of “Brief Encounter” during the intermission when the two ladies from the station buffet hand out sandwiches and cakes (if you’re lucky). The original one-act play is set in the station at Milford Junction, a provincial town somewhere in the shires. It details the accidental meeting of Laura and Alec over a cup of tea. Laura is a suburban housewife, in town as it is Thursday to do some shopping, change her library book and go to the pictures. She has a dull, unemotional husband and two children at home. Alec is a general practitioner who also works at the local hospital one day a week. He is married and also has two children. Both are seemingly happy with their rather dull, routine existences, but their lives are given a jolt and changed inexorably when they meet and discover passions they have never felt before.

For the film Coward opened out the story so that we see Laura at home, shopping at Boots, in a restaurant, at the cinema, out driving with Alec, in a boat on a lake where the two of them enjoy a romantic tryst and in the flat that Alec borrows for a more private consultation. However, they never actually get to make love. This was, after all, 1945. The film was an immediate success. Celia Johnson was nominated for an Academy Award and the film has never been off the lists of the best British films. It may look quaint now, but it contains enough truths, wit and credible characterisations to give it continuing validity. Set against the burgeoning romance of Laura and Alec (the prototypes for Dame Celia Molestrangler and “ageing juvenile” Binkie Huckerback of “Round the Horne” notoriety), are the carryings-on by the buffet waitress Beryl and her young man, Stanley, while there is also a frisson of a relationship between Myrtle, the buffet manageress, and Albert, the station porter. Of course, in Coward’s writing this is merely implied, as everything is kept well and truly above board. In Kneehigh’s version, which is a combination of “Still Life” and the screenplay of “Brief Encounter” and then some, the relationships are more explicit. 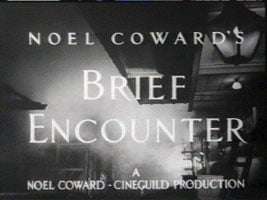 Having taken over a cinema to stage “Brief Encounter” (the Carlton Haymarket was only used as a theatre for a couple of years) Kneehigh is recreating the cinema experience in theatrical terms. It opens with the British Board of Film Censors’ ‘A’ for adults certificate, slightly doctored for the occasion, followed by credit titles, at which point a man and a woman in the front row get up and start to have a scene together about the woman running away. Meanwhile another man beckons from the screen, calling out “Laura!” The woman then rushes onto the stage and through the screen and we are now into the ‘film’ but with the story played out live.

As well as ‘improving’ the script, Kneehigh director Emma Rice has emphasised the comedy as well as playing up the romance – we get crashing waves to indicate heavy emotion and at one point the couple are so happy they start flying. The working-classes are portrayed as typically common and with just one (other) thing on their mind, but in fact Laura and Alec are no better or different in their secret love affair. Another addition is the use of some of Coward’s songs and some of his verse set to music by Stu Barker which punctuate the scenes, setting the mood, be it humorous or romantic. It is not, however, the first musical version of “Brief Encounter”. Back in 1968 the Palace Theatre had a musical version in “Mr and Mrs”, a double-bill of Coward adaptations with Honor Blackman as Laura, John Neville as Alec, and Hylda Baker as Myrtle. It was written by John Taylor who wrote music for “Charlie Girl”.

It is surprising that Emma Rice has introduced so many knockabout comic elements into the story. Coward’s humour rose naturally from his characterisations and situations, but here it seems a little forced, although the portrayals of Myrtle by Tamzin Griffin and Albert by Andy Williams recall happy memories of Joyce Carey and Stanley Holloway in the film. Naomi Frederick as Laura looks not unlike Celia Johnson and she captures the pent-up frustrations of being the ‘happily married wife’ very well. Similarly, Tristan Sturrock gives a sympathetic performance as Alec, a normal sort of bloke to whom this sort of thing doesn’t happen. Together they certainly evoke the best scenes between Celia Johnson and Trevor Howard. Amanda Lawrence is hilarious as Beryl and in a number of other supplementary parts, while Andy Williams proffers a nifty double-act as both Albert and Fred, the oh-so understanding husband of Laura.

And where does Rachmaninov fit in? Well, the film had Eileen Joyce playing his Second Piano Concerto. Here it is used when trains are passing through the station, but at the end, when Alec has decided what is best for the relationship, Laura plays the concerto’s finale, bringing the play to a satisfyingly emotional conclusion and feeling of liberation for Laura.

The staging is very imaginative and the cast supplies all the music (Myrtle’s a whiz on the cello). Laura’s children are played by puppets (shades of English National Opera’s “Madam Butterfly”). As a mixture of cinema and theatre it is a very entertaining curiosity and it’s doubtful whether it would incense even the most avid lover of the film. Like the highly successful stage-version of Hitchcock’s “The Thirty-Nine Steps”, playing at the nearby Criterion Theatre, this version could well be the popular making of it. It might even mean that Carlton/Cineworld could stay as a theatre, with a useful capacity of 444 seats, just right for a medium-sized show such as “Brief Encounter”. And to which film could Kneehigh turn to next: “Oh Mr Porter”, “Carry On Up the Jungle”, “The man who knew too much”, “Peeping Tom”, The Battle of the River Plate”, “The Bridge on the River Kwai”? I’m holding my breath…