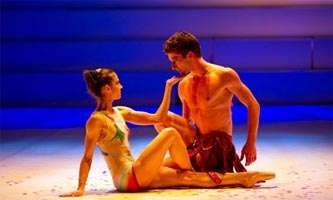 David Nixon’s Cleopatra, his new work for Northern Ballet, the company he has directed for the past 10 years, is impressive. He assembled a strong creative team to work with him in order to produce this original work: Claude-Michel Schönberg (of “Les Misérables” fame – how he must get tired of always having that attached to his name) who provides the music, scenario and orchestration, Christopher Giles as designer and Nina Dunn who created the projections. This is a very happy collaboration and all elements work in harmony to create a coherent narrative, clearly and attractively presented. 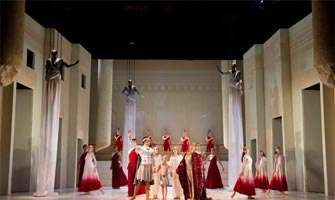 Focussing on the story of Cleopatra herself, and in order to produce a strong narrative, Nixon and Co. have tweaked history, but that is all to the good – the Prologue sees the Egyptian queen in strange duet with the snake god Wadjet, protector of the Pharaohs. Immediately Nixon establishes his movement idiom – evocations of bas-relief, wall-paintings and figures in profile. His style is easy – he choreographs with fluency and with a keen sense of drama-through-movement, so Cleopatra’s confrontation with her brother Ptolemy is febrile, nervous, a sibling squabble that turns nasty; her love duets with Mark Anthony in the second act sensual. Nixon marshals his relatively modest forces with aplomb, so while he may have few dancers as corps de ballet to work with as slaves, legionaries, senators, concubines et al, he cleverly sets them movement which easily fills the stage, giving the impression that less is more. Some characters are superfluous: Octavia, Mark Anthony’s wife and sister to Octavian merely confuses the action, despite a nice cat fight with Cleo over her husband – Octavian too does much posturing and could easily have been dropped. But Nixon deserves credit for attempting to tell this story, and a few weaknesses do not lessen his achievements. He has not, however, avoided the ‘Spartacus effect’, the temptation to make dancers strut and leap in a martial fashion as soon as they don Roman garb. The Grigorovich ballet of that name is, of course, the apogee of the school of dance known as Antique Camp, and there are flashes of it in Cleopatra – they did raise a smile, though. 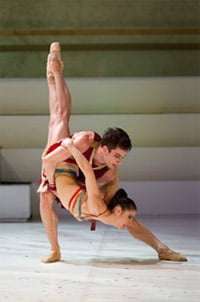 Schönberg’s score is good, if at times a tad derivative – he has cleverly melded middle eastern rhythms with more traditional dance music – nineteenth century scores of Minkus and Drigo, Soviet-style climaxes and soupy melodies. It works especially when played with such focus by the Northern Ballet Sinfonia under their music director John Pryce-Jones. The sets are very clever indeed, and show that successful stage dressing need not cost a fortune or involve massive forces – side walls and broken columns are treated to Dunn’s clever projections which transform them from Egyptian palace to Nile, Roman Curia to tomb. Especially effective is during Cleopatra’s dream on the eve of the Ides of March (Calpurnia is artfully absent): all the walls start to pour with blood. The costumes are simply superb, evocative of Egyptian dress and well made – only Cleo’s Nile swimsuit in one scene jarred. The Romans – apart from suitably skirted Caesar – are noticeable for being different from the Egyptians; the soldiers’ and Mark Anthony’s fashion breast-plates and the long skirts for the senators were likable, evoking but not being togas. It is rare to see such imaginative, fresh and effective costuming for dance, which generally runs to tutu or shift, tights or pants. Lighting is superb, except that there are moments when the dancers’ faces are not highlighted.

All praise to Nixon’s doughty company, who threw themselves heart-and-soul into the project. Martha Leebolt may have lacked the last ooze of sexiness in the title role, but she danced strongly and posessed the stage, dominating scenes in which she appeared (most of them). Caesar is an underwritten part and Javier Torres needs to loosen up a little to enter into the dance-drama idiom that characterises this company – he was still a little too much the ballet prince (he is recently arrived from the Ballet Nacional de Cuba). Tobias Batley had the mammoth part of Mark Anthony: he danced well, but he is a slender, graceful dancer and it was difficult to be convinced by his rough soldier persona in the first act or indeed by his drunken carousing in the second – however, he delivered the anguish over his imminent suicide with aplomb.

Northern Ballet is to be congratulated on this show – it is rare to find a new creation done so well and professionally.