Orchestra of the Age of Enlightenment
Jeffrey Skidmore 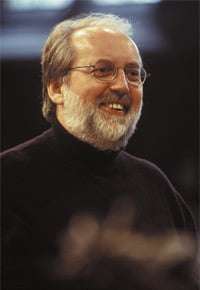 Thus, the Orchestra of the Age of Enlightenment reaches Elgar, and one of his very greatest achievements, and gave us something very special.

With antiphonal violins (and double basses, four on the left, three on the right) in place, Jeffrey Skidmore immediately established unrest and expressiveness, a wholly natural flexibility of pace and phrasing that informed the whole of this wonderful performance, one well-researched into what instruments to use (including Elgar’s own trombone) and in terms of ‘performance style’, the OAE sounding marvellous in its distinctive timbres and with ideal balances – brass and percussion never once blaring, glaring or threatening one’s hearing (unlike most ‘modern’-orchestra performances today); a translucent vividness that ensured details were transparent and meaningful.

The choral singing, unfailingly sensitive, lungs bursting in ‘Praise to the Holiest’, drew one into the narrative without point-making and was as characteristic as the playing in being notably and sustainably ‘different’, described as “like being in church”, which is a pertinent comment.

Of the soloists, Roderick Williams was typically rounded in his timbre and through his humane delivery, if not commanding enough as The Priest (Robert Lloyd on Boult’s recording is unsurpassed) but more authoritative as Angel of the Agony. Susan Bickley (replacing Anna Stéphany) was a very moving Angel, unbearably poignant at times (even losing “brother dear” underneath the orchestra to startling effect – your reviewer was wiping away a tear at this point) and effortlessly taking the high-note option on the third syllable of “Hallelujah”.

Adrian Thompson was magnificent at Gerontius, his enunciation superb (as it was from the other soloists and the choir), dealing heroically with the musical and emotional strain as well as investing a drama that was palpable, matching Anthony Rolfe Johnson (on Vernon Handley’s recording) and Stuart Burrows (live, John Pritchard conducting) as a nonpareil Gerontius.

All in all, this was a revelatory, compelling and deeply involving performance of one of the very greatest pieces of music – Cardinal Newman’s (at times creaky, certainly Victorian) text easy to set aside by believer or non-believer alike – that, disappointingly, was not recorded either for broadcast (BBC Radio 3 shouldn’t have missed this one!) or as a basis for a commercial venture. Sometimes one wonders why the great stuff becomes a treasured memory but the mediocre (whatever the hype) gets slated for posterity!