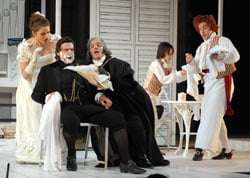 Open-air theatre, not to mention the tennis championships, must be having a rough time of it at the moment. Our beautiful English summer weather is playing havoc with the likes of the Open Air Theatre in Regent’s Park and Shakespeare’s Globe on Bankside. I hear they are considering moving Wimbledon on a month or so. Whatever you do, it’s impossible to escape the summer downpours and Opera Holland Park, even with its brand-new canopy is experiencing some meteorological problems. One performance of “Nabucco” had to be halted for a while because of the noise of rain on the roof. However, this performance of Rossini’s “Il barbiere di Siviglia” went ahead despite the literal intrusion of rain-water dripping over the poor punters at the side of the auditorium. In a typically British display of sang froid, umbrellas were raised and the opera continued without a break in proceedings. Well, the show must go on…

In the event, however, some of the wet weather proved quite apt for the plot of ‘The Barber of Seville’. In the second act when Almaviva and Figaro are climbing through the window in order to abduct Rosina, one of them has to comment on the thunderstorm outside. There was no need for any noises off, however, and, of course, the comment brought the house down. A case, perhaps, of art imitating life! Elsewhere there were plenty of fine comic moments in what is the best, the most famous and the most enduring comic-opera ever written. It has the most memorable overture and, in ‘Largo al factotum’, one of the most sung arias in the whole opera repertoire.

Knowing an opera too well can ostensibly lead to mistakes in staging it. Some productions overplay the comic elements by making the leading roles automatically funny for no reason, and without letting the comedy rise out of the situations and the characterisations. This is often the reason why one has doubts about seeing ‘The Barber of Seville’. Therefore it is cheering to report that Tim Carroll’s production for Opera Holland Park overcomes any such shortcomings,. He has mined a rich vein of real humour and, far from being the stock characters they often can be, each role is carefully delineated and there is none of the awful mugging that often goes hand-in-hand with productions of this opera.

Toby Stafford-Allen makes a fine figure of a Figaro in a bright-red, fright-red wig. He has a strong voice that always commands attention, and he doesn’t overdo the comic business. The Rosina of Frances Bourne is a total delight. Pretty and petite, charming and elegant, she too has a fine voice that carries well over the orchestra and she certainly needed it as her opening aria came during a particularly strong downpour. What was louder, the shower or the show? Neither, for the loudest sound came from the audience’s applause. I thought she was not going to project enough but in fact later on in ‘Una voce poco fa’ she proved to be superbly in charge of her vocal delivery. This is her Opera Holland Park debut but I suspect we shall see her again. 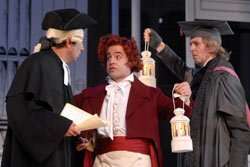 The Almaviva of Brad Cooper (another OHP debut) didn’t begin well in ‘Ecco riddente il cielo’, which may have been due to the chill of the evening. However, when his voice had warmed up, he proved to be a very fine Count, both vocally, dramatically and comedically. Having just completed a course at the National Opera Studio in London, Cooper is well on the road to a promising career. Eric Roberts’s Dr Bartolo is not the usual stock comic character; instead he manages to imbue the man with real-life qualities as he gets duped by all and sundry. There’s a lovely moment when Rosina is having her music lesson. As she opens her mouth to sing, Bartolo yawns very obviously. It’s a beautifully timed moment, although Bartolo, on awaking from his snooze, says “What a boring aria!”

Good support comes from Matthew Hargreaves as Basilio, Robert Burt as Fiorello and young Jacob Moriarty as Figaro’s assistant. With his unflappable aptitude for comedy, here is a star in the making. The City of London Sinfonia plays superbly under Robert Dean’s spirited direction and Roger Butlin’s colourful designs add another layer of elegance to an already bright production. All in all, a truly delightful success.