Martinů
The Greek Passion – Opera in four Acts, to a libretto by the composer based upon Jonathan Griffin’s English-language translation of Nikos Kazantzakis’s novel Christ Recrucified [Co-production with Den Norske Opera; sung in English, with surtitles] 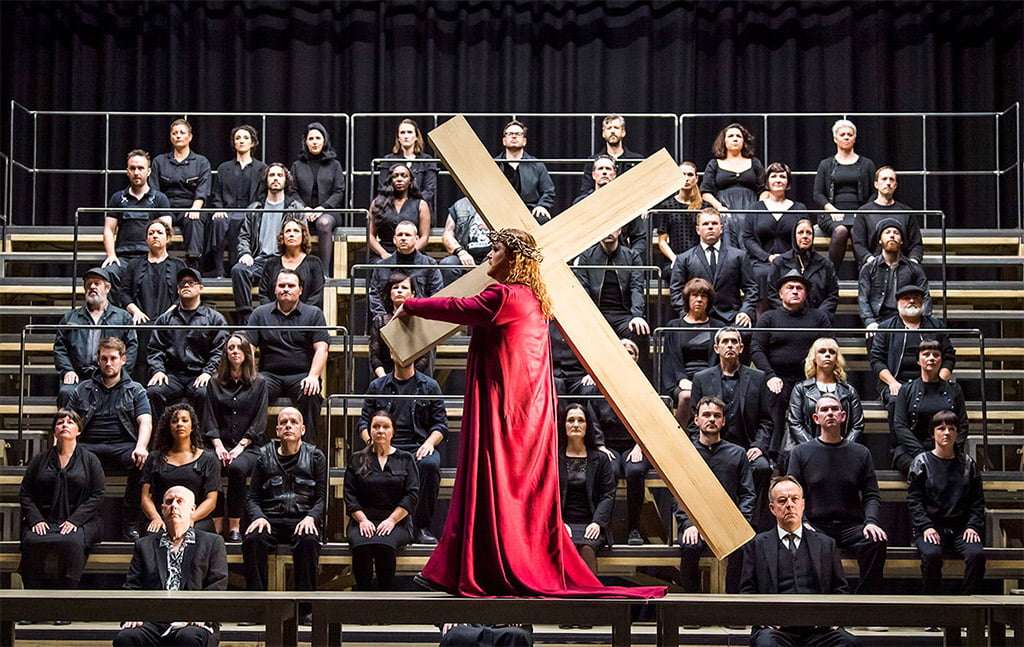 Coming to the end of its run (with only the Lowry, Salford, to go on November 16), Opera North’s sparse, updated production of Bohuslav Martinů’s The Greek Passion – the first new production in the UK in nearly 20 years (and only the second here of the reconstructed original ‘London version’) – is so grippingly focused in both conception and performance that the audience in Nottingham was virtually pinioned to their seats at the Theatre Royal on Saturday night, such was the force and commitment of all concerned.

The original London version from 1957 – Martinů choosing in favour of fellow Czech Rafael Kubelik, then Covent Garden’s Music Director – is more cinematic and direct than his lengthy revision undertaken after Covent Garden pulled out (partly it seems because of Sir Arthur Bliss’s meddling machinations), retaining only about a third of the original music. This version was eventually premiered in Zürich in 1961, after the composer’s death. As Aleš Březina – who reconstructed the original version – expounded in his programme note about the history of the work, these two versions are essentially distinct operatic entities (bringing up Martinů’s operatic tally – for all media, including television – to 15, not 14).

David Pountney’s premiere of the reconstructed London version, in Bregenz in 1999, was a co-production with Covent Garden, making amends for its letting the work go 40 years earlier. Fittingly, Sir Charles Mackerras, who had already recorded the Zürich version, conducted both the initial run (in April 2000) and its revival (September 2004). Particularly memorable was the multi-layered set by Stefanos Lazaridis, evoking a Greek village clinging to a mountainside. 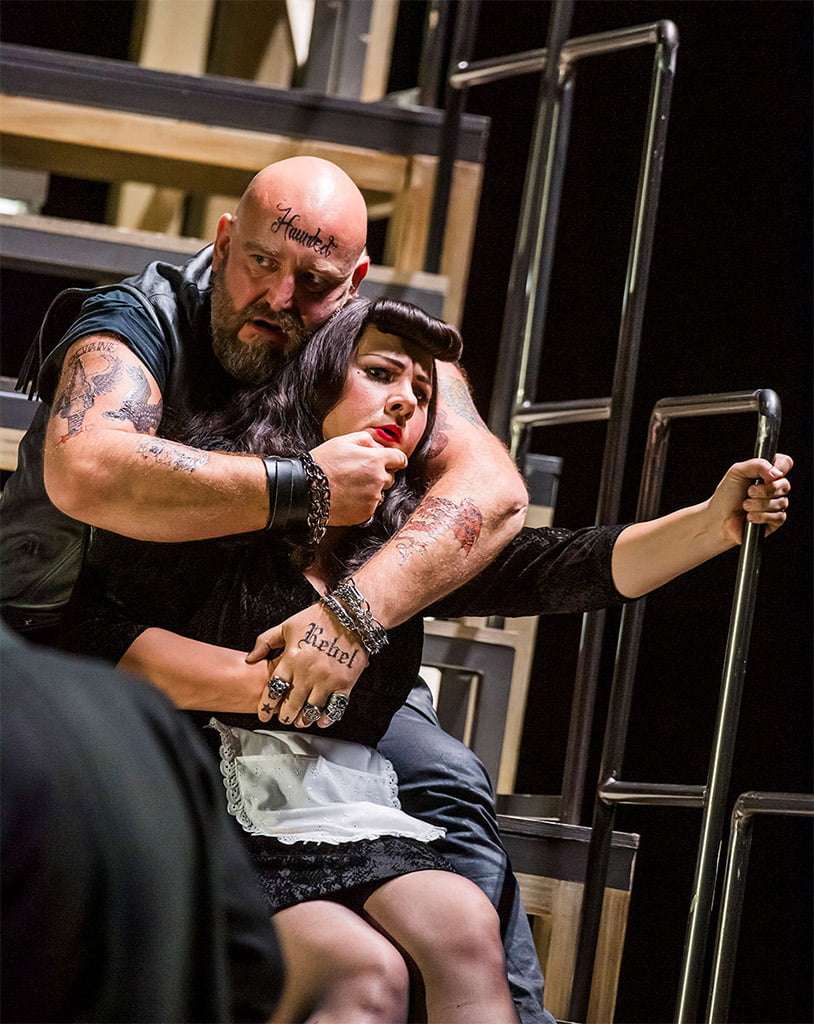 In contrast for Opera North, Charles Edwards’s design for Christopher Alden aimed at a stylised sparseness; a black curtained box with a bank of six rows of seats rising at the back of the stage and solitary chairs downstage in front of a row of tables. One white semi-recumbent effigy, high on the raked seating is collected by a bare-torsoed figure before black-clad villagers, in party mood, enter and take their place on the seating. The village elders enter, led by Stephen Gadd’s Priest Grigoris and watch a reenactment of Christ carrying the cross wearing the crown of thorns. The ceremony over, it’s time to announce who will take the part of Christ, the other apostles and Mary Magdalene, at the following Easter’s ceremony.

Martinů’s own skilful libretto, filleting the kernel of the tale from Nikos Kazantzakis’s novel Christ Recrucified in consultation and agreement of the author, follows the transformation of Manolios, the shepherd, chosen as Christ who becomes overcome by his subject’s mission and, inspiring his fellow villagers chosen as his apostles with him, argues for charity towards the group of refugees who have arrived and initially rejected by the elders. Alden transforms the chorus of villagers into the chorus of refugees by the addition of 30 or so effigies carried by each chorus member until left on the risers to indicate their existence on Mount Sarakina, a concession suggested first by Katerina, who has been appointed Mary Magdalene.

The emotional and dramatic divisions could not be starker, enhanced by the largely black-and-white contrast in the production design, with only the light wood of the seating gantry constructions and the burnished colours of the long-flowing garb for the Passion players, which spend the early part of the opera suspended high above the front of the stage. By the time the elders have had enough and call for Manolios’s excommunication and acquiesce to the crowd’s cries for his death – events aping Christ’s Passion – Martinů’s music is the epitome of violent anguish. Elsewhere Martinů’s humanistic qualities shine through his music, often beautiful with a recurring chorale that seems to enshrine the lines from the libretto that Alden has writ large and lowered at the end of the first act – ‘give us what you have too much of’. When lowered in the second-half suddenly the letters are shattered and fall in a jumble, as the villagers turn on Manolios message of goodness and follow the self-interest of the elders rather than help their fellow humans. It is salutary to consider how relevant the opera is today, perhaps even more so than in the post-war period in which it was written. Salutary and sickening. 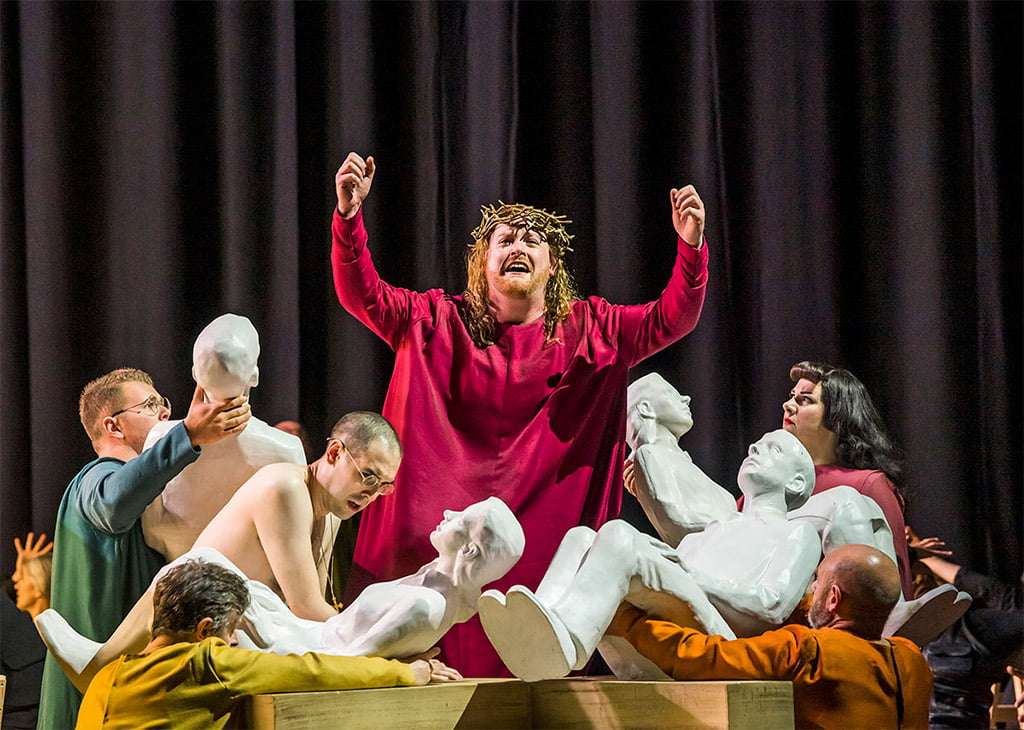 Alden hardly puts a foot wrong. Certain incongruities – The Captain, a largely spoken role and in Nottingham played (with complete authority) by Paul Gibson, standing in for Steven Page, starts the opera in a bunny suit and ends it as Santa Claus; and I’m not convinced Martinů’s original libretto made reference to selling ‘crisps and lager’ – are never overt enough to disrupt the focus of the production, and the performances are universally excellent.

Nicky Spence’s Manolios – all bedraggled locks and awkwardness – exudes stillness entirely appropriate as he morphs into taking on Christ’s mantle. Paul Nilon, in the larger part of Yannakos, is both more conflicted and recognisable (a scally easily persuaded by Father Ladas to try to rob the refugees, turning to request confession from the refugees’ priest Fotis having been chosen to represent Peter). Given the roughly contemporary time-setting, Yannakos’s original donkey (offered for Manolios to ride, as Christ entered Jerusalem) becomes a bicycle. He and Magadalena Molendowska as Katerina/Mary Magdalene shine both emotionally and vocally, while Stephen Gadd and Jonathan Best (as the merchant Archon) embody the ‘establishment’ figures with grim persuasiveness. Jeffrey Lloyd-Roberts brings a rounded portrayal as denim and leather clad, tattooed biker Panait/Judas. John Savournin as Priest Fotis – in white, as a contrast to Priest Grigoris’s black – embodies the anguish of the refugees (it was he who we saw right at the beginning rescuing the effigy), yet brings hope as the opera ends on Christmas Day with a message for the future.

But this is an ensemble opera and it demands – and here gets – stunning choral contributions and, particularly, orchestral playing under Opera North’s Music Director designate Garry Walker. In short: an absolute triumph. May it return to the repertoire as soon as practically possible.