Five young Park Lane Group performers here gave very good accounts of themselves in works by Beethoven; and we were also offered a mystery work, no-one in the audience able to identify its composer, handing the prize bottle of champagne to Judith Weir. 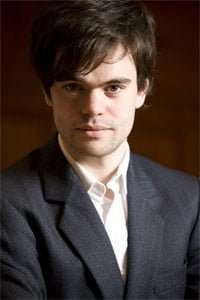 The Scottish pianist Christopher Guild has mainly studied at the Royal College of Music. I enjoyed his performance of the ‘Pathétique’ Sonata, while feeling that one or two aspects could have been improved. He drew excellent tone from the Fazioli piano but I did wish for more attention to the softer dynamics and more subtlety in general. Guild proved to be the best critic of his own performance, as his reading of the improvisatory Fantasie had everything that I had missed in the Sonata. This is a strange work and few pianists have specialised in it – Rudolf Serkin was one. Guild turned in a riveting performance and I do not think I was imagining a greater attention to pianissimos. 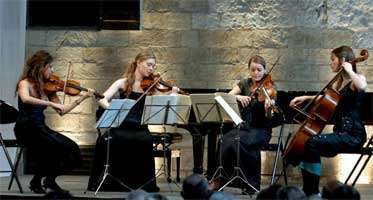 The mystery piece was The Art of Touching the Keyboard, commissioned by William Howard from Judith Weir and first performed by him at the Wigmore Hall in 1983. Both Howard and Weir were in the audience. I guessed it might be by James MacMillan, so at least I got the nationality right. It is certainly a good piece, almost suggestive of the opening of Chopin’s Second Scherzo in its skipping figures and incorporating some forthright glissandos. It received a superbly well-prepared performance from Guild.

The Benyounes Quartet has been going for five years, its members having met at the RNCM in Manchester. They began the opening fugue of Opus 131 with assurance and by any standard the musicians’ interpretation was a fine one, so what follows must be read as one person’s view of one performance on one occasion – I would not want to extrapolate too much from this first encounter with four obviously talented players.

They kept going well virtually throughout this testing work, possibly the greatest piece of music ever written, but they did lose impetus once or twice in the fourth-movement Variations. Zara Benyounes needed to be more incisive on several occasions – democracy will not get you very far in late Beethoven, and I am sure that such great ladies of the past as Marie Soldat and Isolde Menges did not behave like shrinking violets (they did not record late Beethoven but Tutter Givskov of the Copenhagen Quartet certainly did, and she knew how to take charge when necessary).

My impression was that Kim Vaughan was the most assertive of the four: this is marvellous in itself, as a prompt, rhythmically precise cellist creates a fine foundation for a quartet. But the other three could each have taken more enterprise from time to time, especially Benyounes herself. The moments of stillness could have been even stiller, with more risks taken. And the silly waving of bows in the air at the end was out of keeping with the stature of the music. Time and further performances will take care of all these points. I hope the four young ladies stay together and I look forward to hearing them again.