Prokofiev
Romeo and Juliet – Ballet in seven scenes and a prologue 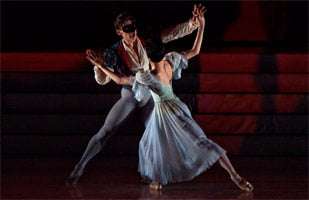 A once-in-a-generation opportunity to see Sir Frederick Ashton’s delightfully intimate version of Romeo and Juliet has been offered to London by Peter Schaufuss to whom the great man bequeathed the work. Schaufuss’s links with Ashton’s Romeo and Juliet cannot be stronger: his mother and father were the first Juliet and Mercutio in Copenhagen back in 1955, and Schaufuss himself made his stage debut as the Page aged eight. To continue the line, his daughter Tara dances Livia, Mercutio’s girlfriend, in this revival (and well!).

Schaufuss is presenting the work himself, without financial backing, hence the somewhat basic staging (although there are excellent period costumes ‘after’ Peter Rice). It matters not a jot, for the orchestra is alive and responsive under Graham Bond’s alert baton, delivering a brisk rendition of Prokoviev’s cut score (the whole show comes in, mercifully, at two-and-a-quarter hours). There is a handful of corps de ballet, but, wisely, Schaufuss concentrates all the action on the principals – the padding of countless tarts and peasants so familiar from Leonid Lavrovsky, John Cranko and Kenneth MacMillan are a distant memory. 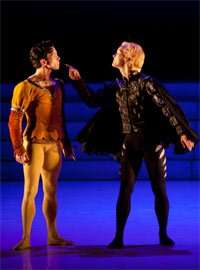 Shining at the centre of this modest jewel are three principals of world lustre, ably abetted by impressive soloists. All praise for Johan Christiensen’s vicious Tybalt, a dancing version of Harry Potter’s Draco Malfoy with his peroxide locks, and Robin Bernadet as Benvolio who had the unenviable task of keeping up with Mercutio and Romeo – his mandolin trio solo was truly quicksilver.

Prodigious, technically astounding, handsome and scenically engaging, Alban Lendorf, Copenhagen’s newest and most exciting Principal, swept all before him as Mercutio – his is a name to watch and, indeed, to book for. His peerless Danish technique allowed him to be both precise with the choreography and then to ‘play’ with it, to let it sing. Indeed, he rubbed just a little of the lustre off Romeo, the prodigiously talented Ivan Vasiliev, who so impressed London last summer during the Bolshoi’s visit. Vasiliev is already a dancer of world stature, but Ashton’s small-scale and detailed Romeo makes an awkward fit for him – he has to rein in his natural ebullience and attack. Additionally, Ashton’s filigree steps (he was also responding to the Danes’ Bournonville training in this) seemed to irk Vasiliev – all he wanted to do was to soar. He was ardent, impassioned, in love with his Juliet, but he showed fraying at the technical edges, the antithesis of the Danish and Ashtonian precision. His compact, muscular frame does not ultimately suit the movements Ashton provides and I suspect he would be even more successful in the MacMillan version in which he could literally hurl himself around. As it was, I secretly wished to see Lendorf as Romeo and Vasiliev as Mercutio.

No complaints whatsoever about Natalia Osipova’s superb Juliet – from her first innocent, wide-eyed entry through the giddiness of love and then the descent into tragedy, she etched every moment with care and luminous clarity. Osipova’s body sings with dance, her beautiful silhouette gladly bending and twisting itself around Ashton’s moves and poses. I thank her for wearing the most silent of pointe shoes (so the effect of her dancing was not marred by unwelcome staccato, as often punctuates Russian ballerinas’ performances), for her willingness to engage with this delicate version of Juliet, and for the generosity of her acting and her dancing. This is a notable portrayal, and showed what a superb Ashton dancer Osipova could be with further coaching.

On first night Schaufuss had assembled many of the ‘old guard’ to appear in the non-dancing roles – superb dancer-actor Stephen Jeffries as Lord Capulet, ex-ballerina Marguerite Porter as his Lady, Wayne Eagling as Escalus, Prince of Verona, that peerless partner and ballet gentleman Donald MacLeary as Lord Montague, Schaufuss himself as Friar Laurence, and even Wayne Sleep as the Page. The evening was introduced by the matchless Dame Beryl Grey, who, as Director of London Festival Ballet, introduced Schaufuss as a young Principal to London forty years ago. An evening of nostalgia, certainly, but one which also showed that ballet has a great future in the hands of the next generation.