Nearly every seat was taken for this appearance by the San Francisco-based Philharmonia Baroque Orchestra conducted by Nicholas McGegan. 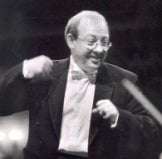 Corelli’s D major Concerto Grosso not only showcased the ensemble’s unusually glowing and warm ‘period’-instrument sound, but also the players sophisticated approach to articulation and phrasing. One does not hear anything resembling sewing-machine prestos or wheezy hurdy-gurdy string-sound from this band. McGegan’s judicious employment of nuanced phrasing and contrasting sonorities is a refreshing break from the interpretative ‘neutrality’ one hears too often from ‘early music’ ensembles.

Handel had back-to-back hits with his operas “Giulio Cesare” (1724) and “Rodelinda” (1725). Both operas are brimming with bravura arias. Carolyn Sampson and Robin Blaze brought enormous character – and more than a little bit of theatricality – to four selections from the two operas. Blaze’s countertenor has unusual warmth that was strongly complemented by the ensemble’s beautiful sound, conveying ‘Dove sei’ from “Rodelinda” with poignant beauty. Sampson sings with enormous colour, navigating virtuoso coloratura with élan – her Cleopatra is tempestuous and more than a little mischievous in ‘Da tempeste’ from “Giulio Cesare”. The strong chemistry between Sampson and Blaze underlined the excitement of both ‘Io t’abbraccio’ and ‘Caro! Bella!’ – leaving this listener wishing McGegan and the band had road-showed one of Handel’s operas or oratorios complete.

The first half concluded with a Vivaldi Violin Concerto. McGegan, the orchestra, and superb violinist Elizabeth Blumenstock proceeded to gleefully demolish the hackneyed image of Vivaldi as a composer of ‘elegant’ concertos, employing unusually wide dynamics and a robust array of articulations and phrasing, emphasizing intentionally-jarring dissonance in each of the movements. This was near-Bartókian Vivaldi, displaying the Italian master’s revolutionary side, and served in a manner that was musical, exciting, entertaining, and cliché-crushing.

Pergolesi’s “Stabat Mater”, for two high voices, strings and continuo, was the sole work on the program’s second half. Whilst the outer movements are replete with solemnity, Pergolesi cannot help but unleash his operatic side on the body of the Latin poem based on one of the most poignant and tragic scenes in the Bible, yielding some of the most beautiful and dramatic vocal music of the Italian baroque.

Again, Sampson and Blaze brought enormous character to the text, with McGegan and the orchestra providing a strong foundation for the music’s wide variety of moods and colours. The work seemed to fly by in far less than the forty minutes of its actual duration – due in large part to the increasing momentum Sampson, Blaze and McGegan brought to the latter half of the work, yet managing to ease the work into its meditative, restrained final ‘Quando corpus’ duet.

One would be hard-pressed to match this combination of musicianship, that combines ‘authentic’ practise with first-tier artistry, and that connects on such a direct level, one of the most satisfying Baroque programs that this listener has experienced in a very long time.