Mendelssohn
String Symphony No.10 in B minor
Violin Concerto in E minor, Op.64 [Revised Version]
Piano Concerto No.2 in D minor, Op.40
Symphony No.4 in A, Op.90 (Italian) [Original Version] 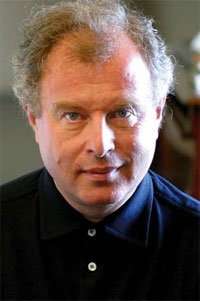 Following a concert marking the bi-centenary of Franz Joseph Haydn’s death, András Schiff returned to the Philharmonia Orchestra for one to honour the birth of Felix Mendelssohn, also 200 years ago. Throughout this truly excellent evening, two things stood out, the close rapport between Schiff and the Philharmonia Orchestra’s musicians and that Mendelssohn’s music is of undoubted genius, fluent but never glib and displaying a refined but outgoing sensibility that touches and enlivens.

Of Mendelssohn’s 12 (or 13!) String Symphonies, the one in B minor is more a Sinfonia, a single movement, an Allegro with a slow introduction. From the off, Schiff and the reduced Philharmonia Orchestra (founded on two double basses) judged the music’s scale perfectly, solemn and pregnant at the opening, becoming more graceful to lead into the faster music itself played with style and affection with something saved for the exhilarating coda that was brought off with panache.

Serge Zimmermann’s biography doesn’t give too much away beyond that he was “born in 1991 into a family of musicians”. Could he therefore be the son of violinist Frank Peter Zimmermann or of violist Tabea Zimmermann (and therefore the offspring of the late David Shallon, but there are numerous other Zimmermanns who are known musicians … composer Udo for example). Serge Zimmermann introduced himself as a natural player, poised. The odd roughness aside, this was a flowing performance of Mendelssohn perennial E minor Violin Concerto (of the so-familiar Revised Version, the occasionally played Original is not so mellifluous), one without contrivance, very musical, if not-yet being an imposing, fully-formed view of the piece. The greater interest came from Schiff and the Philharmonia. One wondered how much Zimmermann was tailoring himself to Schiff’s view of the piece, for the performance had an experience that Zimmermann seemed happy to go along with, the benefits including a smooth, unsentimental slow movement and a finale that, for once, wasn’t rushed off its feet, the result being shapely and sparkling.

For Piano Concerto No.2, the solo instrument was situated at an oblique angle, Schiff sitting with his back to the flutes and horns (valve-less but not complemented by similarly ancient trumpets or drums). Schiff stood to conduct and was animated in doing so. His account of the solo part was virtually perfect, brilliant, soulful and generous, the blissful slow movement full of heart-easing modulations, the playful finale brought off endearingly. This was chamber music, the Philharmonia and Schiff the best of friends.

Finally the ‘Italian’ Symphony in its Original Version (Mendelssohn revised the final three movements, which are rarely heard as re-thought, although John Eliot Gardiner and Gerd Albrecht have made recordings of the revision). Schiff, all these Mendelssohn pieces in his memory and his heart, time and again exploiting the arrangement of antiphonal violins (but the gurgling sounds of those ‘period’ horns were less welcome!), directed an ‘Italian’ that was a joy from start to finish, once again with ideal tempos to aid clarity and articulation (and the Philharmonia’s strings were now more or less at full strength). With the all-important first-movement exposition repeat in place (and not just because of the lead-back bars that Mendelssohn went to the trouble to compose), this was a sunny and ebullient account, crisply detailed, the grace-notes of the third-movement lovingly tucked-in and the finale, a Saltarello, full of point rather than being a showy blur.