From the gutsy attack, urgent tempos (yet with elegant turns to lyrical entreaties) of Coriolan to a glorious, exultant but not-pompous coda to Brahms 1, this was a concert of familiar music new-minted, nothing taken for granted and conducted and played with a commitment that made one discover anew three masterpieces. Attention to detail – and its intertwining – was of particular significance, extracted and placed unerringly; this coupled with a deep-seated emotional power (not least in the unusually solemn slow introduction of the symphony) that radiated vividly even in the most reflective passages as well as those that break the floodgates. Solo playing in the Brahms was distinguished, be it from leader Maya Iwabuchi or oboist Christopher Cowie.

If Christoph von Dohnányi (now the Philharmonia Orchestra’s Honorary Conductor for Life) kept a tight rein on Coriolan (but without it becoming remorseless), his flexibility of tempo in the Brahms combined with a lean and lucid sound balanced successfully the composer’s Classical and Romantic sides, the music driven by internal combustion shaded by unobtrusive beauty. 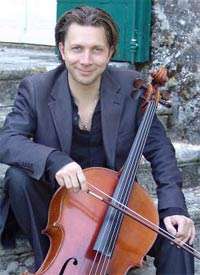 The lavishly talented David Cohen has been Principal Cello of the Philharmonia Orchestra since 2001 and has impressed in that role. In tackling the Everest of cello concertos, Dvořák’s, Cohen scaled its heights impressively and ardently, and also with a poise and rhapsody, without imposing on the music. The concerto had been as well-prepared as the overture and symphony (meticulously); rarely has it been so apparent as to how the writing for woodwinds and horns complements the cellist and which is such a feast in itself. This was a wonderfully integrated performance (beautifully balanced, Dohnányi occasionally visibly restraining the brass), one of teamwork and virtuoso solos, from Cohen of course and also Kenneth Smith (flute) and Elspeth Dutch (guest horn), that revealed the work’s depth and scale as well as its craft, heart, nostalgia, stirring rhetoric and sadness.

Should this performance appear as a Philharmonia download and/or a release on Signum, hopefully without spotlighting the cello (which would destroy the revealing balance the musicians achieved), the latter might perhaps also include (probably as a two-for-one issue) Dvořák’s ‘New World’ Symphony from a few nights earlier (if recorded), which my colleague Douglas Cooksey was so enthusiastic about. Whatever happens, Cohen’s lively, sensitive and flexible account, making chamber music with his colleagues and a sympathetic conductor, will remain in the memory.