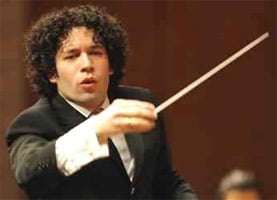 Those who knew that Ion Marin had taken over the Philharmonia Orchestra’s Bedford and Royal Festival Hall concerts earlier in the week were on tenterhooks. But, if there was palpable relief on the part of the audience at the sight of a beaming Gustavo Dudamel coming onto the St David’s Hall platform, then the expression on the faces of the Philharmonia and leader James Clark can only be described as unalloyed joy.

Moreover, any disappointment at the substitution of Estévez’s Melodia en el llano was quickly forgotten as they swept into Berlioz’s Roman Carnival Overture (Marin’s replacement as opener). It had though a South American carnival exuberance and the Philharmonia might have been a samba band in Rio’s Mardi Gras.

Dudamel conducts with every fibre of his being and transmits a very special energy, a veritable Carlos Acosta of the podium. With Berlioz’s opening flourish came an instant surge in the electrical charge. Dudamel exacted rhythmic precision but also brought an expansive sweep to the phrasing, and made Berlioz’s carefully engineered crescendos take on a spontaneous and exciting dimension.

Accompanying Emanuel Ax in Mozart was a different matter. While there was a bite and real definition to the opening orchestral exposition and a sense of setting up musical parameters for the whole movement, Dudamel responded in kind to Ax’s non-showy and almost restrained solo statements. If there was matter-of-factness about this Allegro, it was immediately dispelled in the central Andante and the passion embodied in Mozart’s cantabile lines. The first plunge into the minor was operatic in effect, the subsequent elision to major mode and back again far more subtly underlined. Ax used a bit too much soft pedal for purist taste but, allied to his clearly expressive approach, it was logical enough. Most absorbing were the exchanges in the finale’s Theme and Variations, Ax’s embroidery beautifully articulate, soloist and conductor intent on bringing out Mozart’s humour and effervescence.

After the interval, Dudamel was able to realise a darkness and intensity in Prokofiev’s Fifth Symphony that was what ultimately made this concert memorable. The Philharmonia was evidently in its element. Part of the drama in the symphony’s opening Andante moderato hinges both on the contrast in mood of the two principal themes and on the contrast in dynamics: Dudamel seemed to understand this implicitly and exercised tight control in balancing the movement. What is fascinating about this conductor is his gift for communication. Not only does he convey to the players exactly what he wants, but his body language serves to guide the audience beyond the gestures and deep into the music.

The following scherzo was spiky, sparky and balletic in equal measure, but it was in the expansive lines of the Adagio – with notable clarinet playing from Mark van der Wiel – that Prokofiev’s mixture of stillness and anguish emerged with the greatest emotional force. Dudamel managed to carry this force through into the finale and into in his vision of the symphony’s overall architecture, the motor energy never let up and the ebb and flow of tensions together with the alternation of angularity and lyricism was totally convincing. When all was done, Dudamel the tiger became a pussycat, he couldn’t thank his players enough; but, judging by James Clark’s genial disinclination to bring the orchestra to its feet, the gratitude was mutual.