Although a strong candidate for The Rest is Noise festival at this address, to open its short Britten Centenary series the Philharmonia Orchestra partnered one of the birthday boy’s more substantial compositions – his second-largest for the concert hall after War Requiem – with works by fellow-composers with whom he had a particular affinity.

If the four movements of Frank Bridge’s The Sea (1911) lack a unified style, individually each one makes its own impression. ‘Seascape’ opens intriguingly with a sustained chord that gives way to a siren figure on the oboe; this is echoed by the strings, who then amplify the material until it becomes a swelling sea with billowing timpani rolls. Edward Gardner shaped the dynamics of this movement with a sense of drama, controlling the massive brass climaxes while allowing them their magnificence. The brief ‘Sea-foam’, a rush of immaculately articulated woodwind rivulets, gives way to two less illustrative movements whose ideas by turns recalls Delius (in ‘Moonlight’) and anticipates Bax (‘Storm’). The slow movement’s sensuous bath of moonshine on water contains the most convincing music and was seductively played by an orchestra as attuned to its lyricism as it was to the tempestuous music of the finale. 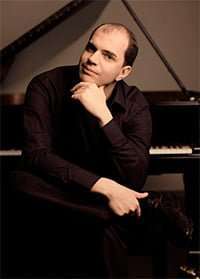 Edward Gardner and his players seemed less at ease when accompanying Kirill Gerstein in his finely-chiselled reading of Shostakovich’s tuneful Second Piano Concerto (1957). The opening ensemble was frayed until a clipped snare drum knocked everyone into shape, but the first-movement’s climactic tutti was so overplayed that it became a fog of sound, high on volume but low on bite. This was all the more unfortunate given that the Russian pianist’s account of the solo part was so engaging – veined with wit and romance throughout the three movements. He would have thrived with a smaller string complement behind him and a conductor more willing to stand back now and again.

The wintry introduction to Britten’s Spring Symphony (1949) was rendered with exquisite severity by Gardner and the excellent CBSO Chorus, and its pagan prayer for the sun to shine out with all its heat was answered by a springtime festival of all the colours. Allan Clayton was the marvellous male soloist – Britain is awash with great young tenors just now, but Clayton’s name on a programme is an especial guarantee of vocal beauty and searching musicality – and with his voice the very “dew that silvers the dove’s wings” (as he sang in Henry Vaughan’s ‘Waters above!’) followed a superbly articulated account of Edmund Spenser’s ‘The Merry Cuckoo’ with hilarious moments of poker-faced insouciance during the bird calls of Nashe’s ‘Spring, the Sweet Spring’. Christine Rice was no less imposing when delivering the work’s great centrepiece, Britten’s dramatic setting of W. H. Auden’s ‘Out on the Lawn, a powerful reminder of the human cost that won us a life of peace, while Susan Gritton joined with Clayton to make light of the fiendish game of musical tag that is George Peele’s ‘Fair and Fair’.

Gardner was constantly alive to the score’s rich theatricality, and from an orchestral standpoint his performance flowed swimmingly but for a weedy cow horn at the start of the finale. Chorally, though, there was a fatal flaw to this Spring Symphony, and that was the mystifying decision to use girls to sing the important boys’ choir part. Yes, there was a smattering of boys among the vast CBSO youth contingent – I counted fourteen in all – however, they were so outnumbered by the battalions of fresh-toned girls and young women that they had little impact on the sound which was overridingly feminine and therefore, effectively, a re-scoring of Britten’s intentions. As for the great moment when Britten asks the boys to shout rather than sing “Sumer is icumen in” as it scythes through the rollicking texture of Beaumont & Fletcher’s grand closing episode, it was practically inaudible; but as no lungs appeared even remotely to heave among the youthful ranks that was hardly a surprise.