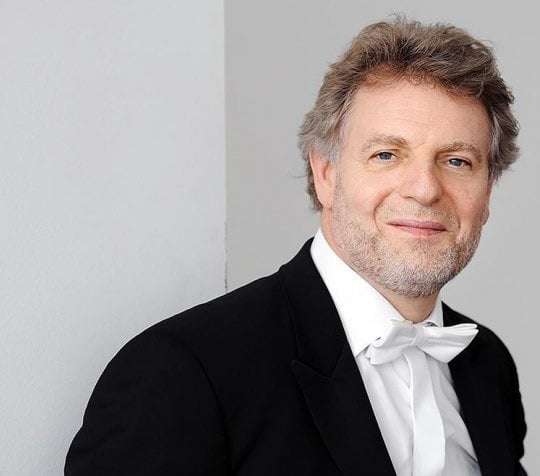 Karl-Heinz Steffens has established a firm relationship with the Philharmonia Orchestra since he first worked with it in 2014, replacing Christoph von Dohnányi. For this concert there was the added attraction of his reverting to his previous job (as clarinettist with the Berlin Philharmonic), which he left in 2007 to focus on conducting, in a performance of Brahms’s Clarinet Quintet with four of the Philharmonia’s principals as an extended preface to the German Requiem.

The two works complement each other with uncanny precision – the Requiem aimed primarily, and occasionally with Protestant sternness, at reconciling the living with mortality and loss, the much-later Quintet more ambiguous and intensely personal, regret, longing and resignation inextricably woven together. Steffens kept a beady eye on ensemble, and the occasional nod ensured that the pace never flagged. Otherwise he played a subtle, first-among-equals role, adapting his tone to the strings so that any overtly solo moments were rare enough to make a point, thus expanding the mystery that suffuses this sublimely enigmatic work, in spite of Brahms’s formal clarity in all four movements, especially so in the first where the return to the exposition and the moment of recapitulation came weighed down with significance. The two violins’ tuning in their exposed passages had an edge that anticipates the young Schoenberg’s overwrought expressionism, and the strings (viola outside-right) achieved a remarkable clarity and weightlessness. The Adagio’s gypsy episode was very much in-keeping with the veiled quality of the reading as a whole, Steffens’s spontaneous, jazz-tinged clarinet wailing, treading on many emotional and stylistic toes. Brahms, especially in his late music, was pathologically private, and the best you can hope for in the Clarinet Quintet is to be admitted into its layered and highly-charged evasiveness, which here was duly and eloquently delivered.

For those who have grown up with Klemperer’s monolithic and uncompromising Philharmonia recording of German Requiem, Steffens’s direction would have seemed particularly mobile, positively encouraging a broad expressive range. The Philharmonia Chorus had been superbly prepared by Gavin Carr and delivered a clear, lean sound with faultless intonation. There wasn’t a hint of strain to the heftier contrapuntal passages and the text was projected with admirable directness. This performance was dedicated to the memory of Stefan Bevier, the Philharmonia Chorus’s chorus-master, who died in January this year.

The lion’s share of the orchestral interest lay in the Philharmonia’s luminous and detailed string-playing, with a lightly applied attack, weight and momentum. The woodwinds had an attractive Baroque-style pliancy (an indication of Brahms’s preoccupations while he was working on the Requiem), and the horns in the ‘For all flesh is grass’ chorus sounded like something out of Lohengrin, and additional weight from the organ was unobtrusively applied. Steffens’s pacing had the tread of a funeral procession, which contrasted beautifully with some lovely moments of stillness, particularly in the Mozartean purity and consolation Elsa Dreisig brought to ‘And ye now therefore have sorrow’. Roman Trekel (who replaced Michael Kraus) sang his two solos with his characteristic Wolfram-like intensity and inwardness.