Lorin Maazel included two pieces that he has been conducting throughout his long career, the Stravinsky and the Scriabin. He also embraced a Rachmaninov rarity, The Rock, inspired by Lermontov’s poem; or maybe it was Chekhov’s story, On the Road, for the author used the same opening lines of the Lermontov to preface his work as did the 20-year-old Rachmaninov who confided to the writer it was his tale that had motivated his composing. Whether concerning Lermontov’s flyaway cloud and a lonely crag or Chekhov’s disillusioned traveller, the music itself, while no more than ‘showing promise’, is certainly illustrative, from the depths and with much sun-hazed colouring, a breezy and engaging description owing to Borodin in the few bars of (Polovtsian) dance. The score’s delicate textures, drama and final sense of tragedy were given full value in this affectionate and perfectly formed performance. 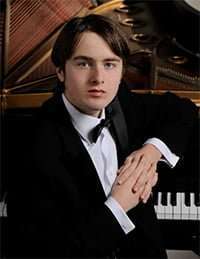 21-year-old multi-prizewinner, including last year’s International Tchaikovsky Competition, Daniil Trifonov made merry with Prokofiev’s brash, motoric and flamboyant Second Piano Concerto (his greatest such work). He threw his technique at it. But there was a lack of characterisation and colour, and dynamics were limited, particularly those that lie between mezzo-forte and fortissimo. The huge, crazy cadenza in the first movement peaked too soon, and the fast music of the second movement, and the processional of the third, lacked for variety. The finale leapt out of the starting gates to no great purpose except to demonstrate that Trifonov can play brilliantly at excessive speed yet also showed how incongruent this movement can be; the ‘folksong’ episode was too great a contrast. Nevertheless, the solo bars following the ‘false ending’ introduced greater variety in his touch and description. Maazel and the Philharmonia were faithful accompanists (although the sea-monster cellos in the last movement might be thought an exaggeration), and if Trifonov is clearly a phenomenal talent, there is more to this concerto than he found here; nonetheless this lack of engagement with what can be discovered behind the notes should not contradict Trifonov’s humongous facility and eager enthusiasm. He returned too soon though for an encore, a Study by Scriabin (I believe), again stunning in its despatch, but following this of all concertos, something less hyperactive and roof-raising would have been welcome.

Of the Maazel ‘specials’ the Stravinsky opened in eerie menace, secretive and slithery, the sudden burst into iridescence crisply delivered. The slower music was languid, arguably too much so if with much sensitive solo playing. Kaschei’s appearance was suitably eruptive although Maazel’s deliberate tempo rather lost the ‘Infernal’ aspect, yet leading into the ‘Finale’ (rather heavyweight) the ultra-soft strings and Nigel Black’s horn solo were both magical. To close, the Scriabin was sensational. From the off the music seduced whether through potent languor or fevered agitation, a free-flowing yet rigorous account blessed with heroic trumpet-playing (Jason Evans) and sensuous violin solos from Andrew Haveron. But this was a team effort, the Philharmonia Orchestra at-one with a great conductor in his element; details were diaphanous, the sound itself voluptuous, the final climax taking off ‘big time’ with Scriabin’s extravagant scoring (including organ) flooding the auditorium to overwhelming effect. The final chord – long and loud – clinched a fabulous performance and was greeted by a properly ecstatic ovation.