The Philharmonia Orchestra is currently having a fling with Prokofiev’s Fifth Symphony. Back in May there was an outstanding performance with Tugan Sokhiev and – give it a couple of weeks – there’s one coming up with Gustavo Dudamel (17 February). 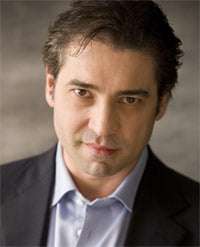 Nicola Luisotti (who will succeed Donald Runnicles as Music Director of San Francisco Opera in September this year) and who, at the time of this Philharmonia Orchestra concert, was on the eve of finishing a run of “Turandot” for The Royal Opera, opened with the overture to Verdi’s opera “The Force of Destiny”. He was on home-ground and led a performance of dramatic summonses and impetus, dignity too and an agreeable through-line. With some electrifying playing, and incisive detailing, what I assume was Luisotti’s debut with the Philharmonia (at least in London) could not have been better launched.

Prokofiev 5 was less convincing. Although the playing remained superbly unanimous and committed, Luisotti rather overplayed the work’s primary colours (more attention to the too-thick-sounding bass drum and the virtually-inaudible piano would have been welcome – both are essentials in this composer’s sound-mix). His conducting gestures – a show in themselves – became more and more resistible (look away now!) and transitions and tempo-relationships were weaknesses. The first movement proved jerky, the scherzo’s coda was hardly a gradual accelerando, its biting irony swamped by bright colours. The slow movement proceeded too easily; although the climax was a predictably big noise the changes of tempo leading to it were a mess; and rarely, anywhere, was there anything approaching really quiet playing. The finale was the highlight, amiable and pointed, but the coda lacked its headlong, mechanistic qualities. Arguably too soon to return to this work given Sokhiev’s conducting of it, there was a sensationalist aspect (and visual distractions) to this performance that palled early on. Do percussionists really need to stand to whack a tambourine or ping a triangle?!

Earlier, Luisotti and the Philharmonia Orchestra were sympathetic accompanists to Boris Giltburg in a fresh-faced approach to Tchaikovsky’s ubiquitous First Piano Concerto. Giltburg’s mannerism-free and crisply articulated playing was a joy, so too his refusal to turn the solo part into a self-aggrandising vehicle; indeed his ‘accompanying’ of the orchestra was indicative of his selfless credo, the Philharmonia responding in kind, not least with cello, oboe and horn solos of distinction, and a creamy-rich flute introduction to the middle movement from Paul Edmund-Davies.

As a generous encore, Giltburg offered ‘La leggierezza’, the second of Liszt’s Études de Concert (S144), in a performance both glittering and beautifully sculptured.