Not surprisingly a more-or-less ‘full house’ greeted the main concert of the evening; more surprising, maybe, but certainly gratifying, was the excellent attendance, the stalls seats very nearly fully occupied, for “Music of Today”, the last in the current season and the first in the refurbished Royal Festival Hall. It was a good idea to feature George Benjamin (born 1960), a firmly established composer, and in music that has entered the repertoire through many performances and having been recorded. As ever, Julian Anderson (Artistic Director of MOT) spoke to his fellow-composer. Benjamin gave basic introductions to the three works of his being played and he was neither without humour or the common touch.

Anderson identified the Three Miniatures for solo violin (2001, first played by Irvine Arditti who also premiered the Revised Version) as being “complicated and intricate”. Maybe for the performer – and certainly so in the melancholy last one (‘Lauer Lied’) in which the violinist’s left-hand must execute pizzicato and pitching simultaneously. But the listener is more aware of the rich expression of ‘A Lullaby’, which spirals upwards to dreamland, then ‘A Canon for Sally’, which recalls Bartók in its pungency and rhythmic gait. Maya Iwabuchi defied Benjamin’s technical demands to make real music. As did her Philharmonia Orchestra colleagues in “Upon Silence” (1990), performed in Benjamin’s re-write for pairs of violas and double basses and three cellos from the original for five (six-string) viols. Consistent to both is a mezzo-soprano and a poem by W. B. Yeats (“Long Legged Fly”). The music is full of imagery and atmosphere, the textures darkly luminous and scurrying; Gudrún Olafsdóttir gave a quite wonderful account of the voice part – living every word as if it were a opera.

These two 10-minute works were followed by one double this length. At First Light, now 25 years old, was inspired by a Turner painting (“Norham Castle, Sunrise”): a “12th-century castle … is silhouetted against a huge, golden sun … solid objects appear to have melted under the intense sunlight” (Benjamin). Scored for 14 musicians – piano/celesta, percussion, trombone, trumpet, horn, flute, oboe, clarinet/bass clarinet, bassoon/contrabassoon, string quartet and double bass – Benjamin creates bustling activity and striking gestures, as well as distance and shadow. While there is also much wonderment, and a cathartic climax, there is too the seeming discrepancy between extra-musical effects and abstract dense writing that doesn’t quite reconcile. However, the performance, under Franck Ollu, was obviously excellent (he also conducted the Yeats setting) – so At First Light must remain as something of a tough nut to crack as well as music to return to. 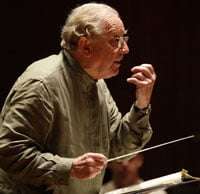 The opening work of the concert that Sir Charles Mackerras conducted raised (again) a few doubts about the ‘new’ acoustic of the Royal Festival Hall. The Prelude (not ‘overture’ as the programme had it) to ‘The Mastersingers’ was full of good things musically. Mackerras brought vividness, bustle and tenderness to it, and avoided pomposity, but the loudest fortissimos were edgy (especially the glaring trumpets and trombones), the bass was light (but not the timpani!) and the cymbal clashes crude. This untamed sound was ear-ringing (and did Wagner no favours). Yet, the positioning of instruments is superbly precise; one could really hear that Mackerras had the violin sections either side of the platform and the additional ambience of the sound brings depth without compromising immediacy; but there is a case for treble reduction, bass increase and ensuring consistent quality of timbre in the loudest dynamics. 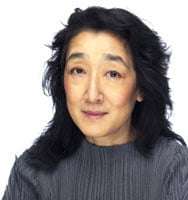 Altogether more palatable was the Mozart, the smaller forces sounding beguiling and tangible. Mackerras’s vigorous conducting robbed the first movement of some of its majesty and there were moments when Mitsuko Uchida suggested she would have liked a more spacious tempo. Nevertheless she played with feline grace and exquisitely judged touch and there were some magical moments; but there was also a lack of ‘transportation’ and blandness set in at times. More repose in the Andante would have been welcome, so Mackerras’s amiable tempo for the finale offered compensation, until Uchida entered like a tigress let off the leash! She settled and some of the interplay between her and the orchestra was chamber music of the highest order. It would have been nice to know the author of the first-movement cadenza; very possibly Uchida herself.

This was, in terms of minutes, a short concert – 66 to be precise (in these performances) – but it had a satisfying shape. Janáček’s Sinfonietta may be concise (all over in 25 minutes) but it is has real substance and is not short in the brass department, requiring 11 additional trumpets (of various types). Maurice Murphy (‘Morris’ in the programme), recently retired from the London Symphony Orchestra, was one of the ‘extras’ in a section that brought security and gleaming sound to their contributions. And, it must be said, the harshness of the Wagner wasn’t apparent here and the bass line seemed better projected (although it was the same eight double basses in a line across the back of the platform). Surprisingly, Mackerras now banked the violins all together despite Janáček’s keenly antiphonal writing.

Mackerras, no doubt incorporating his Janáčekian researches and editing (although the effete glockenspiel, however correct, is no substitute for the tubular bells that some conductors, including Czech ones, have opted for), was suitably bracing in the opening and closing fanfares (and the impacting timpani was now a boon). Mackerras brought out the rambunctiousness of the music and found its soul, too, but some sentimentality was out of place and the finale was rather too deliberately paced, a lack of impetus that made the exuberant and triumphal final bars less than inevitable.

Mackerras and Janáček are synonymous, of course, and he (in his 82nd year) is currently conducting “Kátya Kabanová” at The Royal Opera – superbly, too. He will lead Sinfonietta again on July 28 – at the Proms, with the BBC Philharmonic – close enough for both performances to be a little ‘cancelled out’; but this Philharmonia one left little doubt as to Mackerras’s identity with this composer and the Orchestra’s rapport with its Principal Guest Conductor.

Mackerras let it be known that he was donating his fee for this concert to Friends of the Earth, which Sir Charles believes has “influenced a colossal shift in the political debate and public perception of this issue.” Climate change, of course.