The concerto’s beginning was uncertain: the great, famous opening chords were hesitant in both volume and weight. Was Hélène Grimaud experimenting? More likely, some degree of nervousness was making her extra-careful in placing these chords. From Vladimir Ashkenazy the ensuing performance was lacklustre and shapeless. If there was fire in the belly, someone had forgotten to light it. It spluttered and then died down. Grimaud supplied necessary aristocratic poise, but not passion. Her quieter passages were a model of clarity as she accompanied the orchestra rather than led it.

Disappointing! I feared for the Shostakovich 8. Indeed, its opening was puffy and half-hearted. Then, abruptly, the wind changed and became an assured and vivid account of one of Shostakovich’s finest works. Suddenly, the Philharmonia and Ashkenazy became alert, calmly involved, with a resolute grasp of the composer’s idiom. 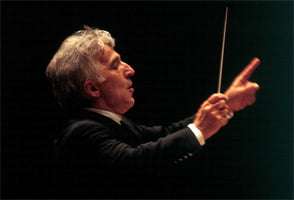 The long first movement – which often slithers around the table, aimlessly – here had backbone and shape. Implacably, Ashkenazy led us through into Shostakovich’s spiritual journey of white-hot meditation and pained lyricism, almost unbearably intense in its unrelenting forward tread, until it reached the mighty, cacophonous climax of deafening trombones and drums – sibling to the agonised “What?” or “Why?” in Bruckner 9 and Mahler 10. The following cor anglais solo, from Jill Crowther, bravely and beautifully voiced what may be a plea to live in some sort of peace, in despite of the terrible knowledge – the fear – that the climax asserts (and will repeat). The remaining four movements are a sort of garland, for, in some respects, Shostakovich 8 is a human testament in one movement, with addenda. Those addenda, however, constitute facets of the real world, in all its awkward, restless variety and sadness.

This performance from Ashkenazy and the Philharmonia had vigour, stateliness, irony raucousness and shape. There was another glorious feature – the performers consistently gave Shostakovich’s instrumentation a telling, precise rightness of both timing and colour. Each new entry – agitated strings, clarinet and bassoon interchanges, and trumpet clarions – made its point and declared a sonic purpose. This care over orchestral colour kept the music vibrant, communicating and alive.