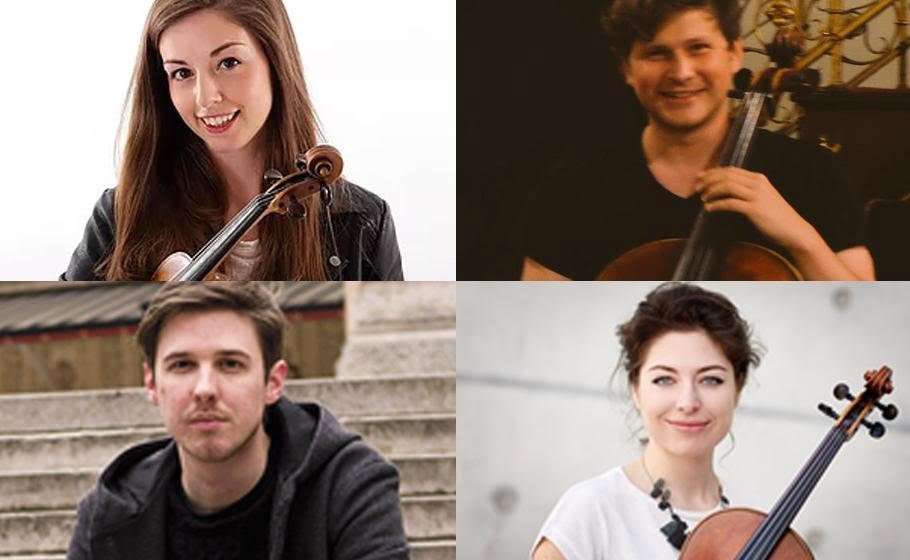 This notable event was of several ‘firsts’. Eddington is a district just north-west of Cambridge, having been earmarked for extensive development a few years ago. Much of the new construction work, principally homes and a shopping centre, has been completed. There is clearly much to do, but when it is finally completed Eddington will possess a singular character which will surely attract many to this beautiful part of the countryside.

Eddington also possesses, within the Storey’s Field part of the development, a brand-new Centre Hall, designed by MUMA, with the acoustic courtesy of Bob Essert, a remarkable building more than capable of being used as a concert venue. The great attraction for musicians and audience is the superb acoustic properties the Hall offers. Shaped like a shoe-box, and lined with wood on three sides, floor, ceiling and seating, the fourth audience-facing glass wall is hung with full-length curtaining for performances.

The acoustic has to be experienced to be believed. Outside of Wigmore Hall in London, I have never heard such rich and wholly natural ambiance in any concert venue in Britain as that of Storey’s Field Centre Hall. The sound is so natural that the audience can immediately concentrate on the one thing that brought them there – the music.

We were fortunate to be present at the debut concert of The Queen’s Hall String Quartet, founded by John Boyden. Two Beethoven Quartets, Opuses 74 and 95, surrounded the new Quartetto Conciso by Robert Matthew-Walker. He was present, perhaps feeling that what he had written would be overshadowed by Beethoven’s masterpieces. Such was the commitment of the musicians that his work was given with the same care and musicianship they brought to Beethoven.

Matthew-Walker explains that the Quartetto Conciso is the second of three single-movement Quartets, each lasting around ten minutes, designed to be performed separately or together as a three-movement work. The first, Quartetto Breve, is already premiered. Quartetto Conciso, completed in August, is lyrical and more tonally based, in E-minor. Various strands are presented in the Quartetto Conciso, each fully explored, until the final lyrical section brings them together in a long theme on the viola. This first outing was very persuasive and the audience’s reception enthusiastic.

In the Beethoven, the differing characteristics of these varied masterpieces were fully projected by these young players. In Opus 74 the first few bars held their magic, with the immediate contrasts making their proper expressive effect; and the equally great Opus 95 was also finely played, its fire and energy apparent from the start. The wholly original ending, so difficult to bring off convincingly, was fully achieved on this occasion.