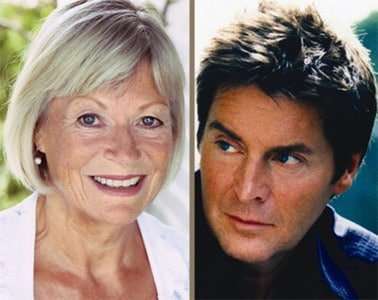 Annabel Leventon and Robert Meadmore are two of the most respected talents in musical comedy. Leventon was an original cast member of the London production of Hair, and she also featured in both the stage and film versions of The Rocky Horror Show. Meadmore starred in such shows as Brigadoon, My Fair Lady and Camelot. Last year the couple were cast in the ill-fated production of Jerry Herman’s Dear World, a musical version of The Madwoman of Chaillot, and decided create a cabaret act. Taking as their theme various aspects of relationship, the couple’s programme covers a wide spectrum, including Stephen Sondheim’s ‘The little things you do together’ to numbers with more tenuous links to their theme such as ‘Ice cream’ from Jerry Bock and Sheldon Harnick’s She Loves Me.

Both singers are in fine voice, with ringing, melodious delivery and good enunciation. The Sondheim material includes Meadmore’s impassioned ‘Losing my mind’, giving us a rare masculine approach to this ballad of obsessive affection, and a stunning, ferociously bitter, version of ‘Could I leave you?’. They also bring a persuasive compassion to Sweeney Todd’s ‘Not while I’m around’. From She Loves Me (which could be given a more detailed account of the plot to set up ‘Ice cream’) Meadmore sings the title song with appropriate abandon, and from Fiddler on the Roof there Is a droll ‘Do you love me?’. Meadmore brings such conviction to ‘Song of the sand’ from Herman’s La Cage aux Folles that it becomes immensely moving, and Leventon’s dramatic ‘And I was beautiful’ from Dear World brought cheers for its emotional power.

Leventon worked with Peter O’Toole in Jeffrey Bernard is Unwell, and Meadmore played Lancelot to Richard Harris’s King Arthur in Camelot, two legendary hell-raisers. Leventon is full of admiration for O’Toole, who she considered a master at his craft. After such eulogy, it comes as a shock when Meadmore announces that “Richard Harris was a f****** nightmare!”. When he was good, though, he was apparently magical, and Meadmore recreates the dramatically blustering scene leading to the tender ‘How to handle a woman’.

There are three French songs included, Jacques Brel’s ‘Ne me quitte pas’, and two associated with Edith Piaf, ‘La vie en rose’ and ‘Les trois cloches’. Though Meadmore confesses that his French is not perfect, Leventon’s is excellent (she spent some time working in France), and melodies always sound better in their native language. Leventon also introduces a song titled ‘Upside down’, which was written by her son, Harry Adams, plus a number, ‘Piano player’, for which she wrote the lyrics. Other highlights include Frank Loesser’s ‘Sue me’, effectively taken at a faster pace than usual, and the Gershwins’ ‘Let’s call the whole thing off’. Meadmore makes Irving Berlin’s ‘I love a piano’ into an impassioned confession, including the splendid verse, and the evening is bookended by two grand Berlin duets, the competitive ‘Anything you can do’ and another of the evening’s several showstoppers, ‘You’re just in love’.