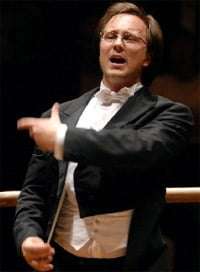 Westminster Cathedral was packed to the rafters for the UK premiere of this sleeping giant from Eastern Europe. A giant at 110 minutes and we were advised that it had been “cut for artistic reasons” (based on a recording, about 20 minutes of music was missing). Those expecting the discovery of a missing link between Szymanowski (who apparently admired Roman Maciejewski’s music) and the Lutoslawski/Panufnik generation (Maciejewski was born in 1910, in Berlin, and died in 1998), might have been surprised at the conservative nature of the music. There was perhaps the odd whiff of the more exotic side of the older composer of “King Roger” or the “Stabat Mater” in the choral writing and the chiming bells, harps and pianos, but in fact Szymanowski was a positively avant-garde figure compared to much of what we heard and it was striking to read that the work had its world premiere at the 1960 Warsaw Autumn Festival – Calum MacDonald notes that Maciejewski’s “Requiem” divided the audience, which one can well imagine.

It was by all accounts the composer’s intention to set the complete text of the Requiem, but by the time he got to the ‘Dies Irae’, the work was of such vast proportions that he decided to stop there. The first five sections act as a sort of large up-beat to the main musical argument, but at the same time contain the most effective music. The beguiling opening ‘Oratio’, with soft-held chords and ecclesiastical-like chanting, seems to look forward to the late 20th-century world of Arvo Pärt and John Tavener, whilst the setting of the words “let perpetual light shine upon them” brings glittering, transparent, beautifully heard orchestral textures that suggest that the composer perhaps made a mistake when turning down the offer of work with MGM. In between comes the ‘Kyrie ‘ – a rather lumpy, much too long and academic-sounding fugue, accompanied by two pianos, perhaps harking back to “Les noces”, but with about half the fire end energy of that masterpiece. Stravinsky also came to mind in several parts of the ‘Dies Irae’, uncomfortably close to The Rite of Spring for a few bars and therein lies the real problem – the whole piece, although having some undeniably beautiful moments, appears to be by a composer in search of something original to say. The “day of wrath and doom impending” – didn’t really arrive – it was loud certainly, but compared to the apocalyptic visions of Verdi, Berlioz or Britten, it proved a damp squib.

The venue of Westminster Cathedral, whilst in some ways perfect for such a sacred epic, also inevitably meant that we didn’t quite hear everything as we should. The vast cavernous acoustic gave a wonderful atmospheric glow to the performance, in particular to the very much on-form BBC Singers and BBC Symphony Chorus (the members seemed to be accompanied by several volumes of music hidden under their chairs), but much of the instrumental detail disappeared – the bows of the violinists suggested that they were working very hard, but to no great effect!

The four solo voices play an important part in the work and sad to report that none were up to the task. One might be charitable and again take the acoustic into account, no doubt the BBC Radio 3 recording will be more sympathetic, but the vocal quartet, all Polish, seemed unable to project further than the first few rows and also seemed rather unsure of what they were singing, the soprano and tenor sometimes alarmingly under the note – very disappointing.

Michał Dworzyński kept the whole thing moving as best he could. The reaction of some of the audience suggests that this writer might be in a minority when he says that this sleeping giant should have been allowed to continue its slumber, but without the support of the BBC nobody would have had the chance to hear the piece at all and we should at least be grateful for that.