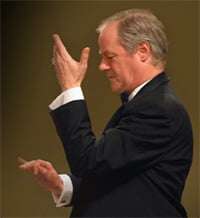 Ronald Corp turned sixty a few days into this year. For this belated birthday-concert he ensured that the four ensembles that he is music or artistic director of were with him to party. Corp founded the New London Orchestra and its associated Children’s Choir. Highgate Choral Society was given top billing – maybe because of seniority or because it sports the greater number of choristers – and was even afforded its own projected logo onto the Hall’s side walls: but these should have been doused during the performances.

For this combination of forces, Carl Orff’s (old and spicy) Carmina Burana (1937 in fact( was an ideal and sure-fire choice. It’s easy to love Carmina Burana. It’s just as easy to go off it! If only Orff had set fewer verses, yet its hour-long, full-circle shape is very logical – fore and aft mixed fortunes via pastoral frolics, bawdy shenanigans and courtly love, with a roasted swan for supper. Many a conductor has made this music seem portentous, gaudy and indulgent (the latter partly due to Orff’s failure to avoid repetition of slender ideas). Corp very successfully steered clear of these misdemeanours. Yet, although stasis was sidestepped, there were times when the performance was rather subdued, pedestrian even. The ‘Dance’ (No.6), for orchestra, was with Maypole but without piquancy (lovely flute solo though), while ‘Circa mea pectora’ (18) was rushed, making the unflappable Mark Stone seem harried, phrasing shapelessly, and ‘In trutina’ (21) was reserved rather than suggesting the text’s “frisky”. Furthermore, there were times when the NLO could have had been a few more in personnel – six double basses in this Hall against a large choir isn’t ideal – and some of the percussion work was less than pristine, timpani prone to muddiness and reticence for example. The NLO boasts some fine players, though, not least amongst woodwind principals.

On the plus side, and there were many more of these than negatives, Corp kept rhythms pert and ensured that the score made beneficial progress. If not the ultimate in consistent pitch, or unanimity and enunciation, the two adult choruses – fraternally mixed as one festive-looking, multi-coloured attired unit – were lusty of voice and brought terrific enthusiasm to these in-Latin adventures. Dynamic contrasts were perfectly graded. There was much warmth to vernal and contemplative (if sap-rising) passages. The Children’s Chorus was a little too well-behaved, though. Of the soloists, Mark Stone was unfailingly mellifluous, certainly in springtime – but he was a very temperate amorous monk (nothing debauched here) –, Christopher Lemmings went over the edge (and vocally into the stratosphere) as the flames licked the swan’s feathers, and Claire Rutter stole the heart with her come-hither ravishingly floated top notes.

The first half of the concert featured two works by Corp himself, very much in the English choral tradition, echoes (sometimes more than that) of Vaughan Williams. Britten and Herbert Howells – add to which, possibly, Kenneth Leighton – and all part of the musical air that Corp regularly breathes. Mahler was perhaps unexpected, though. In The Wayfarer (2011) Corp uses three poems that Mahler wrote for Lieder eines fahrenden Gesellen (Songs of a Wayfarer) and he even includes some quotations from Mahler’s settings. Being so-familiar and so-belonging to Mahler these fragments proved a little distracting; and with sixteen vocal soloists a comparison with Vaughan Williams’s Serenade to Music is inevitable, which Corp acknowledges. Corp’s piece inhabits a similar musical world to VW’s (and also glances at Britten’s Spring Symphony), without necessarily matching its predecessor’s gloriousness. Yet The Wayfarer is a rather lovely piece, raptly expressive and suggestive, and the graduate vocalists – all of whom have benefitted from the Musicians Benevolent Fund – made a well-balanced and harmonious crew, and all seem on the cusp of fine careers. In turn, Corp encouraged us to support the MBF.

And All the Trumpets (1989) relates to Vaughan Williams’s Dona nobis pacem and to Britten’s War Requiem; again Corp is candid about such influences (one could add Howells’s Hymnus paradisi) and, like his composer antecedents, he turned to Walt Whitman (Vaughan Williams had also done so for A Sea Symphony), Wilfred Owen (War Requiem), Edward Thomas and Rupert Brooke (the last three poets killed in action in World War I) for literary inspiration. Over 37 minutes, And All the Trumpets proved a graphic and affecting piece, one with a conspicuous development and follow-through, the choirs for this performance well-rehearsed and confident, Mark Stone a compelling orator of eloquent feelings and with some fine solos from NLO’s principals, not least from cello and bassoon, and a trio of querulous trumpets made an impact. Whitman’s Vigil Strange was particularly poignant, Corp’s score ranging overall from tremendous to consoling, and with no lack of threat – it was “The day of wrath” (Dies irae) that had the last word. Maybe Corp was taking Owen at his literal word, that “all a poet can do today is warn.”

But this was also a celebration for a much-liked and -admired conductor, composer and explorer – do try his recording, with the NLO, London Chorus and a distinguished cast, of Rutland Boughton’s The Queen of Cornwall (1924), an ambitious and dramatically sustained Thomas Hardy-inspired melodrama that the gramophone only caught up with last year. It’s on the Dutton Epoch label. Meanwhile, this Royal Festival Hall concert added to one’s appreciation of Ronald Corp’s creativity and versatility.