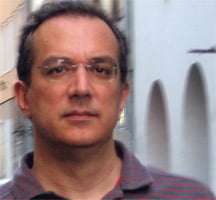 New York-based pianist Uri Caine has, through a series of projects recorded on the avant-garde Winter & Winter label, essentially invented a new genre of music which can be described as ‘crossover’. Caine subjects classical music – core canonical stuff like Mahler 5 and Bach’s Goldberg Variations – to a kind of deconstruction-by-performance, treating it like a jazz standard as a basis for improvising upon, and in the process drawing out all kinds of latent subtexts and historical points of reference.

Although his music initially appalled more-conservative listeners, Caine’s ideas are now close enough to the mainstream that he can be invited as ‘principal guest performer’ to a festival of improvisation at a conservatoire (albeit one whose USP is being somewhat innovative and boundary-challenging). In his arrangement of Brahms’s Variations and Fugue on a Theme by Handel for orchestra and improvising pianist, which he performed with the Trinity Chamber Orchestra, the layers of authorship are stacked up like pancakes, Caine on Brahms on Handel, variations on variations. It could have been a mess, but Caine’s treatment, and the brilliance of his improvisation, produced music to surprise and delight.

Caine customised Handel’s theme with a couple of bluesy inflections. Once the orchestra took up the theme, the piano provided an improvised commentary whose stylistic incongruity placed the music firmly in the present day. There was a pleasing balance between orchestra variation and those piano-led (Caine scatters a few of his own among those of Brahms): as well as some nicely Brahmsian orchestral details, such as chorales in the woodwinds and brass. There were more outlandish variations which took in hyperchromatic Schoenberg, swamp blues (for which conductor Nic Pendlebury stepped aside and let the orchestra jam), and a kind of dissonant jazz that resembled a cross between George Gershwin and Carl Ruggles.

Over it all, Caine’s mercurial playing drew gasps. His improvisations can turn on a dime from free right-hand flights up and down the keyboard to stuttering stride-piano, from the abstract to the crunchily vernacular. In contrast, a relatively unadorned solo variation played entirely in the piano’s highest register had a delicate and vulnerable beauty, like a music box.

Earlier, Trinity students played improvisations based on Debussy’s Preludes. Tom Hewson stood out for his rapt, meditative extrapolation of Debussy’s soundworld, and in a very different way Peter Foggitt ran ‘La fille aux chevaux de lin’ through a stylistic gamut of Beethoven, Chopin, Grieg and Joplin in a virtuoso parody.

It was noticeable how perfectly Laban’s surroundings (the ultramodern studio juxtaposed with light-industrial dereliction and Thomas Archer’s Baroque spire on St Paul’s Deptford) echoed the postmodern frisson of this music.